NEW DELHI:  With the national capital crossing 5000-mark of coronavirus cases for the second consecutive day, Health Minister Satyendar Jain on Wednesday said that the surge may be severe as compared to the previous three waves. “The grim situation of Delhi needs to be understood. In the past few months cases were really low, below 200 even went below 100 per day but in the past three weeks especially it has risen to above 5000. And the way figures are surging, there is a fear that cases may even break previous records of highest single day numbers,” said the Health Minister. 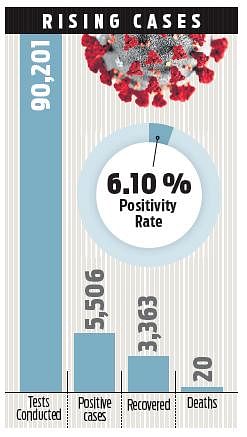 Delhi during the festival season saw the highest single day spike with cases going above 8,500. On Wednesday, Delhi reported 5,506 cases out of more than 90,000 samples collected and 20 more infected people succumbed to the virus. The active cases currently stand at 19,455 and 3,363 recovered from the infection. On Tuesday, 5100 new infections were recorded. Delhi’s positivity rate on Wednesday stood at 6.10 per cent, up from 4.93 per cent from Tuesday although, but is much lower compared to other states, the minister noted.

Explaining AAP govt’s decision to impose the night curfew in the city, the health minister mentioned that this has been done to avoid unnecessary crowds that could cause the virus to spread. “It was found out that people were partying, leading to unnecessary gatherings. The curfew was done temporarily and the impact will be analysed. It is aimed to avoid this situation because if even one is positive among the 50 people, all 50 test positive.

Taxis are allowed and if someone is coming from outside and has valid tickets they can travel. For restaurants and hotels, the timing is anyway 11 PM. I believe that the condition of the virus is not mellow, so we have to be aware and careful. People talk in extremes, either they are in favour of a complete lockdown or none at all. There has to be a middle ground as well,” Jain mentioned.

Now we are on Telegram too. Follow us for updates
TAGS
delhi COVID 19 Coronavirus