Bhattacharjya, a student of Shri Ram School, Moulsari, Gurugram, took to writing as a refuge from all the bullying by her peers.

Saranya Bhattacharjya is only 16 years old, but is already doing exemplary work. The Hauz Khas resident raised Rs 1.5 lakh for the betterment of the transgender community. She has also pledged to extend entire proceeds from the sale of her debut book, Clash with Reason (K2 publishing group, Rs 499), to Mitr Trust, founded in 2005 by transgender Rudrani Chettri to support the trans community. Bhattacharjya, a student of Shri Ram School, Moulsari, Gurugram, took to writing as a refuge from all the bullying by her peers when she was just nine.

“I had gained a lot of weight due to some hormonal imbalance, and I got bullied me for that. Writing became my haven to escape their hurtful comments. Whatever I felt, I poured it down on paper and it gave me a voice,” she says.

From writing in her diary, Saranya graduated to blogging on WordPress as insidethelifeofatraveler. Then three years ago, Saranya met Chettri through her mother at an event, and got to know about the work Chettri has been doing for the trans community for the past 15 years. Inspired, Saranya visited Mitr Trust and interacted with its members.

“I am a part of Angels Network that works with different NGOs. Initially, Saranya was scared of Rudrani, but I encouraged her to speak to Rudrani. Since Rudrani is quite articulate, Saranya was impressed. Thereon, she continued her association with the community on her own,” informs Saranya’s mother, Simmi Bhattacharjya. Saranya had a very different opinion of the transgender community till she met Rudrani. “I realised they didn’t have the basic necessities, and I wanted to do something for them. 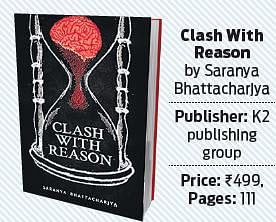 I wanted to break the stigma attached to the community members, but didn’t know how.” Saranya kept in touch with Rudrani, toying with various ideas on how she could help. Then, the pandemic happened. “Their condition became really pitiable. They didn’t have adequate medicines and ration. That’s when I decided to collate my poems in the form of a book to raise funds for the community via Mitr Trust,” she says. And out came Clash with Reason.

Further on, Saranya wants to pursue humanities and mass media. “Art and culture has been a big part of my life as both my parents are into it.” The avid reader, she is quite fond of contemporary literature; John Green being her favourite author, and his Looking of Alaska is her favourite book.

Now we are on Telegram too. Follow us for updates
TAGS
Saranya Bhattacharjya Clash with Reason