A Slice of Afghanistan

That’s how the traders and travellers exchanged their cuisines and condiments which make certain dishes in different countries similar.

HYDERABAD: A University of California Press blog post mentions, “Many people think of the great Silk Road as a mirage in the shifting sands of time; however, the ideas and goods that once moved across Eurasia directed the course of human history. Merchant caravans, passing through the mountain valleys and desert oases of Central Asia, directly shaped aspects of culinary traditions across the Old World.”

That’s how the traders and travellers exchanged their cuisines and condiments which make certain dishes in different countries similar. No wonder then that Kabuli Pulao and dishes like Chaapli Kebab and halwa have origins in Afghanistan with slight variations in method and ingredients. As part of the 10-day food and crafts festival organised by the Consulate General of the Islamic Republic of Afghanistan, Hyderabad. 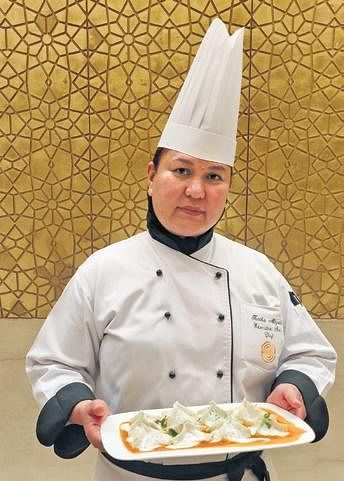 Kabul-based chef Fariba Ali Zada was invited with two of her team members to curate and prepare the menu along with the chefs at Hotel Trident where the event is on till April 10. The 36-year-old chef prepared Chaapli Kebab using chicken, chopped onions, tomatoes, green chillies, coriander powder and chickpea flour. Talking about the food of her country she said, “Our food has origins in flavours while what is prepared in India is based on the use of a lot of spices. Otherwise more or less we eat and cook similar dishes.”

She’s been in the industry for the past 17 years and says that despite the major political troubles in the conflict ridden country she found support from her family after she chose cooking and curating food as her career. She adds, “Initially it was difficult for me. However, I navigated through the difficulties. Initially, my brothers supported me and after I got married my husband was my pillar.” She started her career from Marriott Islamabad where she worked till 2005.

Later, she came back to Afghanistan. At present, she works with Kabul Serena Hotel as Executive Chef. This is the second time she’s visiting India. The last time, she was invited to a Delhi hotel to curate a food festival. Ask her if she likes biryani in Hyderabad, she smiles and says, “I like light flavours. The biryani over here is slightly spicier for me. For example, our palaw is similar to biryani but isn’t actually the same. That’s how despite the fact that for desserts phirni is prepared in both the countries, we don’t use rice and instead prepare it with cornflour while the rest of the ingredients remain the same.” Ask her about the food she loves cooking the most and pat comes the reply, “Mantu. A kind of dumpling filled with minced meat.”