Not a fishy business

While most film actors invest in real estate, luxurious cafes, or produce movies, Dharmajan chose a much lucrative business.

It is 7 am on a Saturday. While the rest of Cemetary Junction, Ayyappankavu, Kochi slowly awakens, Dharmoo’s Fish Hub prepares itself for the flurry of customers that would rush in an hour. Contrary to expectations, numbing olfactory stereotypes of any place associated with fish, Dharmoo’s Fish Hub is a breath of fresh air in its truest senses. The place is spotlessly clean. Crabs in a bucket seem to be waging a battle. Little do they know that escape is not an option. Opened in July by actor and comedian Dharmajan Bolgatty, the success of Dharmoo’s Fish Hub has led to a franchise, opening in other parts of Kerala.

While most film actors invest in real estate, luxurious cafes, or produce movies, Dharmajan chose a much lucrative business. And a brilliant one at that. Fish. Being a coastal state, fish is a must have for most of us. Is that why the actor chose such a trade? He laughs and says, “I can’t be a brand ambassador for Adidas or Nike, it is best to represent fish!” The comedian then changes the tone and modestly replies, “I belong to the coastal area. Since my childhood, I have been experiencing the lifestyle of coastal people. Meals without fish were considered incomplete. This is something I know.” Surely the actor goes by ‘Do what you know best’. 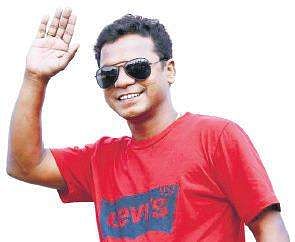 In a time when fish is anything but fresh, how does Dharmajan convince the public about the freshness of his fish? “We have traditional fish farms. We also collect fresh fish from traditional fishermen, thus assuring that the fish are healthy without chemicals. Providing fresh fish to society is my motive,” Dharmajan shares. The fish hub was not born in a day.

This long-cherished dream was efficiently planned and executed by the actor and his 11 friends. With the second one opening at Panampilly Nagar, another at Changanassery by actor Ramesh Pisharody and the other by actor Vijayaraghavan, the business has indeed sailed.

Surely it isn’t easy to maintain the cleanliness of such a place, the actor immediately quips, “I wanted to begin a fish hub with good standards wherein customers can experience the difference in both, the quality of fish and the way deals are conducted. The ambience is something I’m quite particular about.”
Dharmajan has also extended the range of his trade by venturing into fish curries and ready-to-cook marinated fish. “Organic spices and pure coconut oil will be used in our curries. They would be customised and prepared on-the-spot,” he says.

The actor’s personal favourite would be small fish. “I want the young generation to eat more small fish which contains calcium in large amounts. Our hub specialises in small fish. Most people prefer buying bigger fish as cleaning and cutting it won’t be laborious. Little do they know the benefits of small fish,” he adds. Dharmoo’s Fish Hub believes in fresh fish. And they adhere loyally to it.

Stay up to date on all the latest Kochi news with The New Indian Express App. Download now
(Get the news that matters from New Indian Express on WhatsApp. Click this link and hit 'Click to Subscribe'. Follow the instructions after that.)
TAGS
Dharmoo’s Fish Hub Dharmajan