Spice Route project back on track

It was in 2014 that Unesco signed a MoU with Kerala Tourism Secretary launching the Spice Route Project.

It was in 2014 that Unesco signed a MoU with Kerala Tourism Secretary launching the Spice Route Project. However, other than organising a culinary event in 2016, the project had hit a standstill. Even Unesco was not interested in associating with the culinary event as it did not meet the objectives of the project. It was more interested in promoting heritage and culture than tourism through this project. 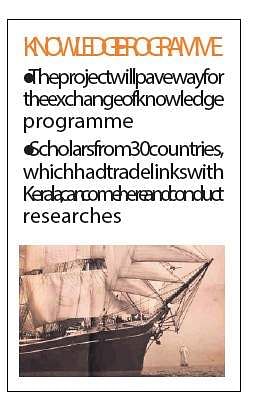 According to P M Noushad, director, Muziris Heritage Project, the objective of the government is to enable cultural and knowledge exchange via the Spice Route project. “We are looking to sign an updated MoU with Unesco in which objectives of the Spice Route project will be clearly defined. The Muziris Heritage Project will moot a proposal to the government within a week wherein details of the fresh MoU will be given. Later, the government will hold dialogues with the Unesco,” he said.

The project will pave way for the exchange of knowledge programme. Scholars from 30 countries,  which had trade links with Kerala, can come here and conduct researches. Similarly, the scholars from Kerala can visit these countries to study the state’s links with these countries. “Earlier, the Spice Route Project was considered as a tourism initiative. Now, we want to bring more research, documentation and exchange of knowledge.

We can also get technical assistance for research activities carried out here. Kerala will greatly benefit from the project as researchers from 30 and more countries will be arriving here,” he said.Tourism prospectsThough tourism will not be a prime focus of the Spice Route project, it can attract several tourists from abroad. “Spice Route can be more attractive than Silk Road project. Terrorism has its effect on the Silk Road project while Spice Route has no such issues. Tourists from the countries associated with Spice Route can visit our heritage sites to learn more about the trade history of their nation with Kerala,” PM Noushad said.

Stay up to date on all the latest Kochi news with The New Indian Express App. Download now
(Get the news that matters from New Indian Express on WhatsApp. Click this link and hit 'Click to Subscribe'. Follow the instructions after that.)
TAGS
Spice Route project