KOCHI: Actors turning directors is the recent trend in Malayalam film industry. And, the latest to join the bandwagon is  national award-winning actress Surabhi Lakshmi. The actor has made her debut through a music video ‘Kaumaaram’, the second track from the video series ‘Pennal’.‘Pennal’, conceptualised by Shyla Thomas, depicts the five stages of a woman’s life - ‘baalyam’ (childhood), ‘kaumaaram’ (adolescence), ‘yauvanam’ (youth), ‘mathruthwam’ (motherhood) and ‘vaardhakyam’ (old age). The first video of the series ‘baalyam’ was written and directed by Shyla herself. Gayathri Suresh composed and Sreya Jayadeep sang it. 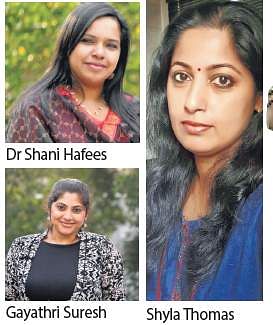 The video ‘Kaumaram’ portrays a teenage girl, all piqued about the world around her. Her inquisitive nature is portrayed through the art form of nangiarkoothu. “When I was asked to direct the video, Shyla briefed me about its content. She wanted the video to narrate the dreams of an adolescent girl.

The music triggered in my mind images of forests and nangiarkoothu. I feel nangiarkoothu and koodiyattam have some connection to nature,” she adds. Surabhi says she gave a detailed script to Shyla and Dr Shani Hafees, who sang for it. “They had full faith in me. So, I had the freedom to direct the video as I visualised it,” says Surabhi.

Shyla, who penned the lyrics, says she had total trust in  Surabhi and her ability to think out of the box.  “I had total trust in her talent and dedication. During the composition of the song, I urged Gayathri to weave in a feel of nature and dance. It came out well and Shani rendered it beautifully. So, when I planned a music video, I knew Surabhi would do it well. I think the emotions have been conveyed perfectly through nangiarkoothu,”  says Shyla.She adds that they are happy with the way the video has been received by the viewers. “The next video will be out soon,” adds Shyla.

But, Surabhi credits teamwork for the success of the entire video. While Pappinu cranked the camera, the edits were done by Rizal Jainy.  The team had the creative support of Sudheesh Gopinath and Jithu K Jayan. The sound design was done by Renganath Ravee and Ramesh C P did the colouring.

“The success of everything depends on teamwork. I briefed them what I had in mind, they perfectly visualised it. The shoot was done in a forest and the team had to carry equipment and food for kilometres, all by foot,” says Surabhi. Edamalayar, Bhoothathankettu and Kakkayam were the locations.

So, will she do a full-length feature film soon? “I have that in my mind. That’s why I decided to do the video.  But directing a film involves a lot of time and work. For that, I need to be known as a great artist. I want to be evaluated as someone who did good characters and not by the award. I am happy that directors like Ranjith sir, V M Vinu sir and Jayaraj sir appreciated my work” adds Surabhi. She will soon be seen in movies like Vikruthi, Arakkallan Mukkalkkallan and Ulta.

Now we are on Telegram too. Follow us for updates
TAGS
Malayalam film industry