KOCHI: One fine day during the lockdown, Thiruvananthapuram-based artist Pradeesh Raj received an unusual request from a friend. Mulling over getting a tattoo done, the friend, who was a hip-hop dancer, asked Pradeesh to come up with a prospective design that would combine his forte of mural painting with the western counter-culture movement of rap. Intrigued by how the two diverging traditions would play off each other, Pradeesh gave it a try only to be pleasantly surprised by the result.

The attempt ignited a unique idea and Pradeesh decided to imbue the ancient form mural painting, inspired customarily from the Hindu mythology and the Ramayana and Mahabharata, with contemporary motifs and pop-culture elements.

The result is an Indian Monalisa dressed as a devi giving her ever enigmatic smirk to the viewer. There is also an apsara besotted with her own beauty and trying to capture it in a selfie. Hanuman holds a gun, goddess Kali seems to be having a blast surfing while Krishna plays a saxophone instead of the flute. Pradeesh also pay homage to great masters of art from history. His portraits of Vincent van Gogh, Salvador Dali and Frida Kahlo depict the famous artists in their most iconic frames. The 30-year-old does not stop there. Comic book super heros are mythicised with The Joker from Batman becoming the sly Naradamuni.

“I learnt mural painting when I was in school. Our art teacher there specilised in murals so he taught us well. However, after getting into college for fine arts, the emphasis was on working with different mediums. I got back to murals during the lockdown and this what I have based my thesis on. The traditional practice which is either done on walls or paper allows for the use of only five natural colours but I want to go beyond the norm and experiment.

I have developed a variation of mural painting that is a blend of contemporary by mixing humour, social satire and politics. Also I wanted to employ the enabling and modern possibilities of digital medium to a historically relevant genre of mural painting,” says Pradeesh who is currently pursuing his masters from College of Fine Arts Kerala, Thiruvananthapuram. 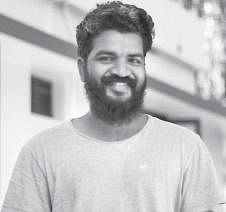 Given the liberties Pradeesh has taken with what continues to be regarded as a sacred artform, it isn’t surprising that he has amassed detractors. “I have received many unsavoury comments and messages from purists but I am not interested in engaging with these people. My attempt is to explore the vast scope of the form and also possibly delve into its limitations. When I was a kid everyone used to watch shows like Mahabharata on TV. However, at present they have been replaced by super heros so according to me, this reinvention is very relevant,” adds Pradeesh.

When old is made new
Pradeesh’s works include an Indian Monalisa dressed as a devi giving her ever enigmatic smirk to the viewer. Hanuman holds a gun, goddess Kali seems to be having a blast surfing while Krishna plays a saxophone instead of the flute. Pradeesh also pay homage to great masters of art from history.