Work on the third major component that constitutes phase 1 of the L7,525 crore Vizhinjam International Seaport project will kick off on Thursday

THIRUVANANTHAPURAM: Amid the row over the CAG report which says private partner Adani Group benefits more from the Vizhinjam International Seaport deal than the state, the Vizhinjam dream is set to move a big step forward this week.

Work on the third of the three major components that make up phase 1 of the Rs 7,525 crore port project - the berths where ships would actually dock one day - will kick off on Thursday evening. The berths, in this phase, will be all of 800 metres in length and will have a width of 60 metres. 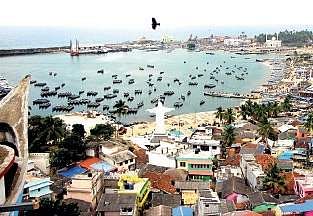 “The berths are designed to accommodate two of the largest mother vessels available today. The largest are around 400 metres with a capacity of 19,000 TEU (twenty-foot equivalent unit or the size of a standard cargo container). But the berths at Vizhinjam are designed to cater to vessels of up to 24,000 TEU,” K Jayakumar, CEO of Vizhinjam International Seaport Ltd (VISL), the state government firm supervising the project, said.

Adani Vizhinjam Port Pvt Ltd has assigned the construction of berths to Afcons Infrastructure Ltd. The berths will come on the seaward side of the land reclaimed for the project. It is on these berths that the super-post-Panamax cranes, the biggest of their kind in the world today, would be deployed. Container yards and other back-up facilities will come up on the reclaimed land.

Vizhinjam project is being designed in four phases. There are three major works in phase one; construction of the 3.1 km breakwater, dredging and reclamation works and the construction of 800 metres of berths. The first two works were already underway when the work on the project was inaugurated on December 5, 2015. In its own way, the berths would be an engineering marvel. The piles have to be driven up to depths of 30-40 metres below the seabed, Jayakumar said.

The South-West monsoon which made landfall on Wednesday also will have a say on the project implementation in the next two months. Focus will now shift to the berths. Breakwater construction will shift to a low gear due to the monsoon.

On the dredging and reclamation front, 30 to 35 per cent work has been completed.
On another front, following a CAG report which said the state’s interests were not adequately protected in the concession agreement, the LDF government has announced a judicial probe into the deal.

August 17, 2015: Kerala Government inks concession agreement with Adani Group
December 5, 2015: Work kicks off on project
December 4, 2019: the date when commercial operations are expected to begin at the port