Game of Thrones Season 7: So is it written, so shall it be done

Here is a countdown of the seven prophecies on the Game of Thrones that have been proven or are yet to come true.

In a realm where magic, witches, the undead and dragons co-exist, prophecies will exist too. Thus, Game of Thrones is bountiful with its share of prophecies, visions and dreams, just as the fandom of the show is running rife with possibilities and conjecture

Rhaegar’s prophecy in the book says, “The dragon has three heads”.  So, the thing to dwell over is the fact that there will be three dragon riders! Daenerys is practically the mother of the dragons, so it’s without question that she is one of them, but what about the other two? Season Six told us two things — one, Jon is Rhaegar and Lyanna’s son; two, Tyrion bodes well with dragons. So will these two loved characters end up being the dragon riders alongside Daenerys? Is Bran a contender too, considering his ability to talk to animals? But a Three-Eyed Raven perched atop a dragon? Nah. That doesn’t seem likely, although one can never know, given George RR Martin’s love for always doing the expected.

Prophecy 2
The Stallion Who Mounts the World

When Daenerys got married to Khal Drogo, and became pregnant, it was buzzing amid
Game of Thrones fans that their child would indeed be “The Stallion Who Mounts the World”, and that the great Khal will unite the entire world into a single Khalasar, and lead them to conquer the entire world.

But we soon found out that everything isn’t what it seems to be in the Game of Thrones realm. And although the Dosh Khaleen announced this with great vigour, due to an unfortunate series of events, Daenerys’ child (Rhaego) ended up being still-born.

As a young, curious, and impatient teenager, Cersei Lannister, eager to know her future, snuck away to the forests outside of Casterly Rock with her companion Malara Hetherspoon.

As she headed to see the reputed witch Maggy — one that can read people’s fortune, she performed her
first act of cruelty when she entered her home without her permission, and then threatened to have her eyes gouged out if she didn’t comply in telling her fortune.

Maggy, as Cersei pointed out, lived off her father — Tywin Lannister’s property, and hence submitted, providing Cersei the opportunity to have three questions answered. Cersei asked when she would marry the prince, implying Rhaegar Targaryen as the prince.

Rhaegar was in line for the throne after his father. Maggie simply stated that she wouldn’t marry ‘the prince’ and instead, she would marry ‘the king’.

Prophecy status: Proven true. Cersei did, in fact, marry the king, but it wasn’t Rhaegar, it was Robert Baratheon, who was already king when Cersei married him. 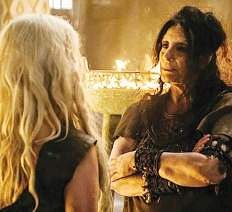 When Cersei asked Maggy if she’d become queen, Maggy had a fitting response. She said, “Aye. Queen you shall be... until there comes another, younger and more beautiful, to cast you down and take all that you hold dear.”

In the beginning of the series, Sansa was to wed Jeoffrey and with King Robert’s passing, Sansa would have taken over Cersei, to become the younger queen like Maggy prophesied — but all of that went to hell.

Later, Margaery was to wed Jeoffrey and yet again, would have been the younger queen to take over the iron throne alongside him, but Season Six proved us wrong.

Myrcella was also a strong contender in the race. However, with Margaery and Myrcella dead and Sansa in the North, yearning for vengeance over her family’s downfall, seems like the only contender now left is Daenerys, who is adamant on taking over the throne that was snatched from her ruling family by the Baratheons.

Prophecy 5
Maggy’s Prophecy on Cersei’s Children
Cersei also asked Maggy about her children with the king, and to this, Maggy had a somewhat crazy response. Maggy said, “Oh, aye. Six-and-ten for him, and three for you. Gold shall be their crowns and gold their shrouds”.

Shrouds are burial garments, and with that, she implied that Cersei alone will have three children with no emphasis on her kids ‘with the king’, and went on to pronounce that all three would die before
her. 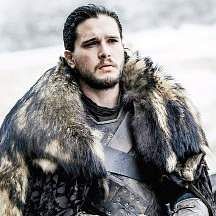 Cersei did eventually have three children —  two sons Jeoffrey, Tommen and one daughter — Myrcella, but she had them with her twin brother Jaime and all three of them died young.

While Jeoffrey, the most hated king, died at his own wedding due to poisoning, Myrcella too died out of poisoning by Ellaria, who was avenging her lover Oberyn’s death at the hands of the Lannisters.

And Tommen committed suicide by jumping off a window in the Red Keep after witnessing the wildfire explosion and learning of his wife, Queen Margaery’s death in Season Six.

She said, “And when your tears have drowned you, the Valonqar shall wrap his hands about your pale white throat and choke the life from you.”

Valonqar in High Valyrian means ‘little brother’. Thus Maggy actually prophesied that Cersei would die at the hands of her younger brother.

At first, it seemed like if the prophecy came true, Tyrion would be the only one who could have done this deed, since he hated her for treating him wrong and he was younger to her.

However, now, not only is Jaime’s inner conscience seeming to come to the rise after the last look they shared in Season Six, post Tommen’s death, but it has also been revealed that though they are twins, and Jaime is in fact younger than Cersei by just a few moments.

Could this, in fact, be true?

Is Cersei going to die for sure?

Let’s not forget, when Ce sei’s friend Melara also asked Maggy if she would marry Jaime,
she was told by the witch, “Not Jaime, nor any other man, Worms will have your maidenhead. Your death is here tonight, little one. Can you smell her breath? She is very close.”
This also came true.

The Red Priestess Melisandre prophesied that the hero Azor Ahai (born 8,000 years ago) will be reborn again, wake dragons from stone, rebuild the Lightbringer and defeat the darkness that looms around. First, Lady Melisandre claimed that Stannis Baratheon was the prophesied reborn, but as the timeline progressed, that went down the drain when Stannis died a nasty death. Now, she prophesies that Jon Snow is in fact the one and only – the reborn Azor Ahai after she brought him to life from the dead herself.

But let’s not forget two things — one, there is another Red Priestess, Kinvara, who believes that Daeenrys is the Azor Ahai and can restore the realm; second, Danerys was the one that woke the dragons from stone. In conclusion, this is the status for the prophecy.
Prophecy status: Yet to be proved.

The penultimate Season Seven of Game of Thrones premiereson Star World and Star World HD  on July 18, at 11 pm.

Stay up to date on all the latest Entertainment English news with The New Indian Express App. Download now
TAGS
co-existGame of Thrones