She plays Marykutty, a fun-loving woman, in the movie

Santhi Krishna, who made a comeback to Malayalam in Njandukalude Naatil Oridavela (2017), will soon be back playing a single mother in Kuttanadan Marpappa. The actor says she enjoyed playing Marykutty as the character was unlike anything she did before. 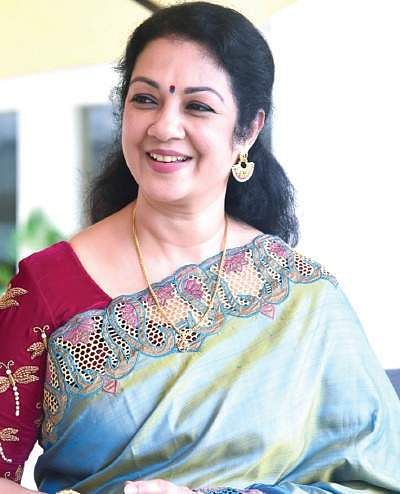 "Unlike my character Sheela Chacko in Njandukalude Naatil Oridavela, Marykutty is a fun woman. She is a single mother but she is more of a friend to her son. I could relate a lot to this role and for me, it was so much fun playing her. I was hyper on the sets and that suited Marykutty's mannerisms," says Santhi Krishna.

The actor can barely contain her excitement. "I remember how rigid I use to be on the locations. Now, I am more relaxed and happy. So, I could easily sink my teeth into this character, who was a live wire," says the actor who began her career in 1980. For Kuttanadan Marpappa, Santhi Krishna shares screen space for the first time with Kunchacko Boban. "We hit it off immediately. As a mother and son, I think we shared a great chemistry," says Santhi Krishna.

Santhi Krishna also turns singer for the movie, and she terms it a pleasant surprise. "I am someone who never plans anything in my career. Same with singing too. Director Sreejith Vijayan asked me to come to Bangalore a day before the shoot began.  I had no idea until I reached the recording studio that I am supposed to sing for the movie. But, the trial went well and composer Rahul Raj was more than happy. So, Sreejith decided to include the track, a lullaby, in the movie. It will be out soon," says the actor.
Kuttanadan Marpappa, that has Aditi Ravi and Innocent in significant roles, will hit the screens by the end of March.

New cabinet to be finalised by next week: Karnataka CM Basavaraj Bommai

Two rockets fired near US embassy in Baghdad: Security source