For many policemen, maintenance of law and order has also come to mean how you treat the needy; how you possibly stop a future crime by preempting a situation of want and converting it into empathy.

MAHARASHTRA:  The Covid pandemic is changing the way we look at various professions, especially the ones that have a straight-jacket definition, such as the police.

For many policemen, maintenance of law and order has also come to mean how you treat the needy; how you possibly stop a future crime by preempting a situation of want and converting it into empathy.

“The pandemic has presented an opportunity for the police force to reach out to the poor and needy,” says IPS officer Dr Abhinav Deshmukh, Superintendent of Police, Pune (Rural). Dr Deshmukh and his team have distributed the ration and food packets to more than 5,000 people during the pandemic.

He says there are many people, particularly senior citizens, who had everything but emotional support. “The elderly have felt trapped in lockdowns. They couldn’t even step out to get medicines out of fear. That’s where we as the police have stepped in and provided emotional and mental succour. We created a helpline for senior citizens. We also formed a separate team to look after them,” says the 2009-batch IPS officer. 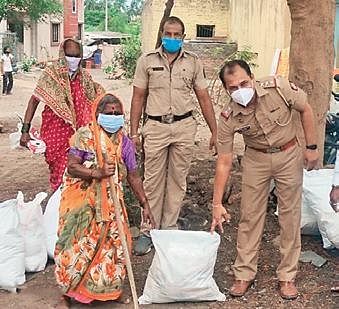 He said the image of the police during the pandemic has undergone a bit of transformation. The tough exterior of a policeman is giving way to a softer man ready to help. “After all, policemen are human beings. They too have families and emotions. So, in the pandemic, we have taken proactive measures to reach out to the people,” says the police officer.

In the absence of resources, the police have been joined by NGOs, activists, social workers and people with a big heart. “We provided ration and food packets to 5,500 families of senior citizens and 2,000 others who were stranded,” said Dr Deshmukh. In the first lockdown, Dr Deshmukh served as the Kolhapur Superintendent of Police. He started his humanitarian initiative of extending help to the needy. He followed it up when he got shifted as the Pune SP.

“During the first lockdown, more than 200 people started walking from Sindhudurg to Kolhapur -- more than 200 km – before returning to their native places,” recalls the officer. “Most of them were stranded labourers. As the lockdown was strict, we stopped them at the Kolhapur border and asked them to go back to Sindhdurg, but they dispersed and entered Kolhapur”.

The police soon realized that they would not be able to stop the poor labourers. “They were missing their families and were deprived of basic needs. We opened shelters for them and provided food. We also arranged transport so that they could easily return to their villages,” said Dr Deshmukh. That episode changed his and his men’s attitude. “We started providing ration and food to tribals and nomadic communities as well as senior citizens.”

Narrating another incident, Dr Deshmukh said in the lockdown, neighbouring state Karnataka had refused to take the bodies of their people who were working in various districts across the border in  Maharashtra fearing a spread of coronavirus infection. “Kolhapur is a border district where several bodies had piled up due to the red tape. Then, we decided to respectfully cremate them at the Kolhapur border by convincing the Maharashtrian villagers. The police performed the last rites,” says Dr Deshmukh.

Dr Deshmukh has also worked in the Naxalite-dominated area of Gadchiroli. He worked among the villagers and took on the Maoists who were bent upon violence. In April 2018, he and his team were instrumental in neutralising 40 outlawed extremists. He has been felicitated with various awards for his remarkable work in the police department.