The essence of good taste: Check out the many preparations you can make with watermelon!

There’s more to the watermelon than its pink, juicy core. It’s the white rind that stores all the edible goodness, which is now the latest fad among zero-wasters.

While you were busy making Dalgona coffee, banana bread and pani puri through the long period of home-isolation, the zero-waste community in Bengaluru was on a different trip.

They were saving up the watermelon rind, the white part of the fruit that they’d otherwise toss in the bin, to rustle up dosa, paddu, sambhar, kootu, palya, halwa, tutti-frutti, salad, stew and even Kimchi.

The use of watermelon rind is common in the traditional kitchens of the Konkan region and arid parts of Rajasthan.

What’s catapulted the watermelon rind, which is tangy in flavour and cucumberesque in texture, into urban consciousness, is worth taking a look. Raaj, who’s the admin of Zero Waste Bangalore WhatsApp group, shares: “An interest in the watermelon rind was always there but the lockdown gave people the time to finally experiment with it. Because it is a summertime fruit, its availability makes it easy to use.” 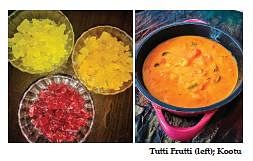 With the lockdown also came the unavailability of vegetables in local shops. “So I decided to use watermelons to their full potential,” says entrepreneur Raghuveer Panaghanti, who discovered that the rind is edible recently. What next? He copied the dosa and kootu recipes off the Internet while he improvised halwa using the OPOS (One Pot One Shot) pressure cooker. “After I shared the pictures on the OPOS Support Group on Facebook, which has members from all over India, others too started making the rind recipes,” adds the 32-year-old. His mother jumped on to the trend just as quickly to make sun-dried chips to go along with the curd rice.

Communications consultant Reena Pillai wasn’t able to score watermelons in her area this season but she’s been relishing photos of Surnoli/Polo, a traditional, Konkani dosa made from the watermelon rind that her mother is whipping up at her Mangaluru home. “However, she tried making a palya from the rind this season and my father loves it. Little does he know it’s a rind dish. If he learns that, he might not eat it.”

As for Mrudula Joshi, who runs a blog on sustainable lifestyle, the road to the rind was a funny one. The 25-year-old shares, “Last month, I had posted photos of the bioenzyme that I made using watermelon peels on my Instagram story.

To this, a follower responded, ‘Do you know you can even make food with the rind?’ I was like what!, is there a world out there that I am not aware of?’ But before I could process the information, my followers had started sending recipe suggestions from gojju to salad and basic vegetables, to their mum’s Mangalorean dishes.” Joshi ended up doing a take on carrot halwa where she replaced the carrot with the rind and milk with watermelon juice. “My sister is impressed with my newfound Masterchef skills,” she beams.

Honey Islam went international with her rind game, making the fermented Korean side dish Kimchi out of it. “I have it with my dal-chawal and rasam-rice. It’s got a nice bite. And since it’s fermented, it will last me a few months,” shares the 33-year-old fermenter, who’s no stranger to rind delicacies. “My grandmother used to bind the badis (lentil dumplings) with a paste of watermelon rind when pahari kheera would run out in the market.”

As someone who’s been tinkering with the watermelon rind since 2016, chef and restaurateur Anmol Menon from Mumbai agrees it’s  an all-rounder ingredient.

“Think of it like a blank canvas. It can be made into tutti fruity, paniyaram, pickle, Japanese sashimi, or use the rind juice as stock water.”

Nutritionist and wellness consultant Deepa BR is happy that fruit peels are getting their due.

“The rind is rich in Vitamin A, B and C, potassium, magnesium and Citrulline, an amino acid that delivers oxygen to muscles. Many hidden benefits to this common kitchen fruit,” she says.