Terrorists tonight carried out a 'Fidayeen' attack on an army camp located on the outskirts of Baramulla town.

CHENNAI: In yet another outrageous incident, terrorists on Sunday carried out a “Fidayeen” style attack on an Army camp located in the outskirts of the Baramulla town. One BSF jawan was reportedly killed in the incident and two others were injured. Both the terrorists involved in the attack were killed by the forces, claimed unconfirmed media reports. 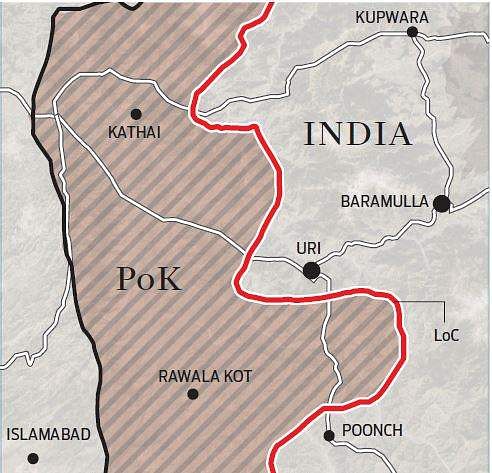 The brazen attack has come less than a week after Indian Special Forces smashed seven terror launchpads in surgical strikes across the Line of Control. “The terrorists opened fire at an Army camp at Jabanzpora in Barmulla district,” Army spokesperson Col Rajesh Kalia said.
The Army camp, according to agencies, is located about 50 km away from the Baramulla town. “The firing was reported at 46 battalion of Rashtriya Rifles and terrorists are believed to have entered the establishment through adjacent BSF camp,” official sources were quoted saying. “Some were also firing from houses adjacently located from the camp.” The attack comes following intelligence inputs about possible terrorist attacks on security installations in Jammu and Kashmir after the surgical strikes on September 29. The attack also comes exactly a fortnight after terrorists struck at army brigade headquarters at Uri, 102 kms from here killing 19 soldiers.
Cross-border firing reported: In yet another ceasefire violation, Pakistani troops launched firing and shelling on forward areas along the Line of Control (LoC) in Pallanwala sector of Jammu district on Sunday evening.
“Firing and shelling from across LoC started late in the evening in forward areas in Pallanwala belt along the LoC. It is intermittently going on,” a Police officer said. The officials could not confirm if any casualties were reported.
This is the sixth ceasefire violation since the surgical strike. On Saturday, Pakistani troops fired at Indian posts and civilian areas with mortar bombs, rocket-propelled grenades and heavy-machine guns in Pallanwala and Chamb areas.

Intel reports had warned of retaliation
The attack comes following reports by intelligence agencies warning the armed forces in Kashmir of a retaliation by terrorists to the surgical strikes carried out by India in Pakistan-occupied Kashmir. The attack also comes exactly a fortnight after the Uri attack