Is the Modi government's Higher Education draft Bill an attempt to consolidate the Centre's powers?

The fundamental aim of the draft bill is to abolish the existing University Grants Commission (UGC), the country’s apex body that distributes funds to public universities based on certain criteria.

The Modi government’s recent draft of the Higher Education Commission Bill aims to dramatically alter the way higher learning is governed in the country. There are fears that the Bill could result in the concentration of power in the hands of the Centre.

CHENNAI: Words are deceptive, it is often said. The Modi government’s recent draft of the Higher Education Commission Bill shows how words can’t just be deceptive, but in fact, cunning. The draft bill is peppered with desirable words like “autonomy” & “uniform education”. But the devil is in the details. By altering a few regulations and rules, the proposed law aims to dramatically change the underlying philosophy and structure of the higher education system in the country.

Firstly, the basics. The fundamental aim of the draft bill is to abolish the existing University Grants Commission (UGC), the country’s apex body that distributes funds to public universities based on certain criteria. This job of distributing funds to universities will be directly taken over by the Union Ministry of Human Resources Development. The draft bill, instead creates a new body, the Higher Education Commission of India (HECI).

This new commission will have unbridled powers over all colleges and universities across the country, including the authority to shut them down and at worst, jail the college or university authorities for up to three years if the commission finds that they disobeyed its orders and refuse to pay the penalty. The only exceptions will be the “Institutions of National Importance”, which are mostly institutes like the IITs.

Never before has a law authorised jailing of a college principal for refusing to heed what a government body dictates in academic matters. But a strong authority to rein in substandard colleges and universities is good, right? Again, the devil is in the details.

Who sits in the commission?

We have to start with the composition of the proposed HECI. Besides the Chairperson and Vice-Chairperson, the commission will have 12 members. All of them will be appointed by the Central government. Out of the 12, three will be IAS officers representing the Central government. Four will be heads of various Central bodies like the All India Technical Education Council and National Council of Teachers Education. One will be a “doyen of the industry”. The other four seats will be divided between two vice-chancellors and two professors in universities.

So out of the 12 seats, just one-third is reserved for academicians. The bureaucrats and appointees of Central government for various other bodies will form a clear majority of seven. This is in sharp contrast to the composition of the UGC. It has 10 members and just two are officers representing the Central government. At least four of the members are teachers from universities and the other four are either experts in various fields or vice-chancellors of universities. 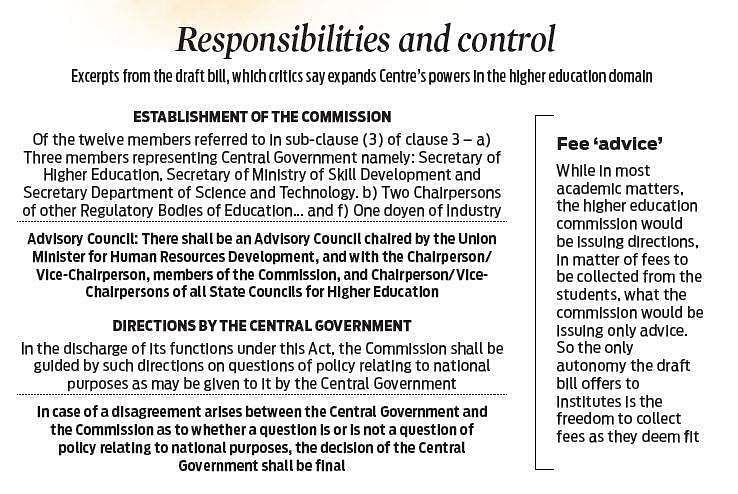 By changing the composition of the new commission, the draft bill would shift the powers to regulate universities and colleges from academicians to bureaucrats and other appointees of the Central government in various bodies. In contrast, the UGC Act, 1956, explicitly limits the strength of government officers to less than half to ensure it is the academicians who play a major role in shaping higher education, and not the bureaucrats, or through them, the politicians. Besides, the new bill makes it mandatory to have an industrialist in the apex body that will govern education.

The bureaucratic control gets worse when it comes to the Chairperson of the proposed commission. The committee that will select the Chairperson will be headed by the Cabinet Secretary of the Central government. Currently, the selection committees for even vice-chancellors of universities are not headed by bureaucrats, but by eminent academicians or experts in other fields.

The 1956 UGC Act guarantees the commission’s Chairperson a fixed term of five years unless he becomes disqualified for the post during the term. But in the proposed bill, the Chairperson of the HECI can be removed by the Central government on several grounds, leaving him, always, at the mercy of the politicians. Also, the commission will have an “advisory council” that will be headed by the Union Human Resources Development Minister and the commission is duty-bound to implement the advice rendered by the council. But the UGC Act, framed in 1956, does not allow such direct interference of ministers.

Why was the then Jawaharlal Nehru-led government so keen on limiting the powers of government in the sphere of higher education? The answer can be found in the report of the first University Education Commission of independent India (1948-49), which was chaired by the scholar S Radhakrishnan, who went on to become the first vice-president and second President of Independent India. It reads: “Freedom of individual development is the basis of democracy. Exclusive control of education by the State has been an important factor in facilitating the maintenance of totalitarian tyrannies. In such States, institutions of higher learning controlled and managed by governmental agencies act like mercenaries.”

In short, the report, based on which the UGC was shaped, said it was always totalitarian regimes that exercised total control over higher education to further political purposes of the ruling regime.

What is the policy of education the commission would believe in? The draft bill says the main functions of the proposed Higher Education Commission is to promote “the autonomy of higher educational institutions for the free pursuit of knowledge, innovation, incubation and entrepreneurship.” It will also facilitate access, inclusion and opportunities to all and growth of research in a competitive global environment.

But the means through which the draft bill aims to achieve the goals belies these ideals. Firstly, the autonomy for the institutions that the bill talks about would be almost non-existent. The bill says that the proposed commission is the sole body that will decide what is taught in the universities and colleges and how it is evaluated. The bill says the commission will specify the learning outcomes for all courses, lay down standards of teaching, assessment, research and “any aspect that has bearing on outcomes of learning in higher educational institutions including curriculum development, training of teachers and skill development.”

The commission will evaluate the “yearly academic performance” of higher education institutes. Institutions that fail to meet the standards, will be closed down by the commission. So, there is little much left for the colleges and universities to decide themselves in academic matters.

Then what really is the autonomy the draft bill offers to institutes? The answer can be found in the omission of a key section from the UGC Act. Under Section 12A of the UGC Act, it is explicitly stated that “no candidate secures admission to such course of study by reason of economic power”.

The UGC Act also speaks extensively about the UGC’s powers to fix the scale of fees that may be charged by the universities and this may explain why the cost of education is still very cheap in the public universities. In contrast, the proposed bill just makes a single reference on the advice the proposed commission can make to governments on “making education affordable to all.”

While in most academic matters, the higher education commission would be issuing directions, in the matter of fees to be collected from the students, what the commission would be issuing only advice. So the only autonomy the draft bill offers to higher education institutes is the freedom to collect fees as they deem fit. On the other hand, the “autonomy” that the present University Grants Commission Act offers is shielding the students from financial burden and allowing institutes a more free hand in academic matters. In words of the Radhakrishnan report, it means “freedom of thought and expression for the teachers.”

Since the draft bills say that both issuing authorisation and shutting down the institutes would be taken over by the higher education commission, there is little left for the universities to do. It may end up merely as a centre which conducts exams for the colleges and publishing results.  The role of State governments would be even petty. Except for a representation in the advisory council, there is little else for the State governments.

The proposed draft bill not just deviates from the present system  by reserving a seat in the higher education commission for a “doyen of the industry.” It mentions that the proposed commission would specify the norms and mechanism to measure the “employability of the graduates.” Employability is a difficult word to define. In the broad context, it only means what the big corporates expect their future employees to be like. This may force universities to align their courses on lines of what recruiting companies want, rather than to help students develop original thought in the form of innovation and research.

What has gone almost unnoticed was that the draft bill goes against certain aspects of Constitution. The seventh schedule of the Constitution explicitly states that “incorporation, regulation and winding up” of universities are in the sole realms of powers of the State governments. The draft bill usurps these powers to a body controlled by the Central government. So the bill will need a Constitutional amendment before it could be passed and there was no mention about that even as the Union Human Resources Ministry has called for public comments on the draft bill.

The union ministry titling the draft bill as an “Act” when releasing it for public comments could have been an unintentional faux (a proposed law is only referred as a “Bill” and is called an “Act” only after it is passed in the Parliament). Also, it could have been just an omission that the bill was released only in English, and not in any regional languages. But giving only about three weeks for the public to air their comments (as emails to a google ID -reformofugc@gmail.com) for a legislation that would vastly change the higher education scenario across the country raises some questions.

For one, does the Central government really value public opinion or — as indicated by the changes proposed in the Bill — is it intent on consolidating the powers in the higher education sphere to itself?