The ministry said the funds were withheld only because Prasar Bharati hadn’t signed a memorandum of understanding with it despite repeated reminders.

NEW DELHI: With the Ministry of Information and Broadcasting terming as “motivated misinformation” the allegations that it had withheld funds meant for Prasar Bharati over the latter’s refusal to pay a private firm for the coverage of the International Film Festival of India, the standoff between them escalated on Friday.

Reacting to the media reports, the ministry said the funds were withheld only because Prasar Bharati hadn’t signed a memorandum of understanding with it despite repeated reminders. “As per the provision of general financial rules, any autonomous organisation receiving grant-in-aid must sign an MoU with the ministry, clearly bringing out the physical and financial targets with timelines for activities to be done by utilising the said grant during that financial year. For the record, irrespective of repeated reminders from the ministry, no MoU has been signed by Prasar Bharti,” it said in a statement on Friday. 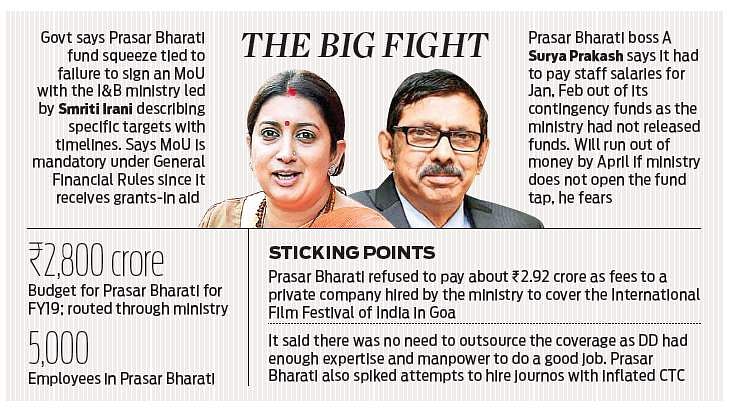 However, Prasar Bharati Chairman A Surya Prakash was quoted as saying by a news portal that the public broadcaster has had to pay staff salaries for January and February out of a contingency fund. The broadcaster may run out of money by next month if the standoff continues, he reportedly warned.

The rift between the ministry and the public broadcaster hit the headlines after the latter said it wouldn’t pay Rs 2.92 crore to Mumbai-based SOL Productions for covering the film festival, as it found no reason to pay a thrid party for doing a job it could have done with in-house crew and equipment. Earlier, Prasar Bharti had turned down the ministry’s proposal to hire two senior journalists---Siddharth Zarabi andAbhijit Majumder--for editorial positions, saying they were too exorbitant for it.

While rejecting charges, the Smriti Irani-led ministry said the government was committed to protecting the interests of all Prasar Bharti employees. The ministry release also sought to illustrate its efforts to curb “wasteful expenditure” at the public broadcaster.

By bringing in human resource information system (HRIS) in Prasar Bharti, the ministry claimed, the boradcaster has been able to save nearly Rs 30 crore per month on salary.

‘We may run out funds if standoff continues’
Prasar Bharati Chairman A Surya Prakash was quoted as saying by a news portal that the public broadcaster has had to pay January and February salaries out of a contingency fund. The broadcaster may run out of money by next month, he reportedly warned

Stay up to date on all the latest Nation news with The New Indian Express App. Download now
(Get the news that matters from New Indian Express on WhatsApp. Click this link and hit 'Click to Subscribe'. Follow the instructions after that.)
TAGS
Smriti Irani Air Prasar Bharati DD Ministry of Information and Broadcasting A Surya Prakash