With higher recovery rate, South leads the fight against the coronavirus

Happily, the recovery rate graph has been steadily inching upwards. While it was nearly 6.6% about a month ago, it rose to 13% on April 17 and touched 20% on Thursday.

NEW DELHI: A close look at India’s data on coronavirus patients suggests they are making a faster recovery in the South and Delhi than elsewhere.

Overall, India is some distance away from matching the global recovery average of 27.35% (see box), but states like Kerala, Tamil Nadu, Karnataka and Telangana are leading the fightback.

The laggards include Gujarat, Uttar Pradesh, Rajasthan, Madhya Pradesh, Maharashtra, where the recovery rate is 15% or less. However, Delhi has performed impressively with over 32.2% recovery rate through its confirmed case count, too, is on the higher side.

Happily, the recovery rate graph has been steadily inching upwards. While it was nearly 6.6% about a month ago, it rose to 13% on April 17 and touched 20% on Thursday.

Kerala is the only state that did phenomenally well in controlling the spread of the virus from the start. After an initial jump in infections and a subsequent spurt, the total case count is under 450, of which 324 have been discharged. In other words, an impressive recovery rate of nearly 74%.

Gujarat which has seen spiralling of positive cases in the last few days has the lowest recovery rate at 7.5%. Ahmedabad in Gujarat has turned out to be a major red zone as the big city has seen nearly 1,300 cases and the number has been going up.

Surat is at second position in the state with nearly 325 cases by Thursday afternoon. State authorities have said that the discharge momentum will pick up very soon in the state.

Similarly, States like UP, Madhya Pradesh, Rajasthan and Maharashtra have also witnessed an increasing number of COVID-19 infections and lower rate of recovery. While Maharashtra is at the worst condition with the largest number of confirmed cases as it has a recovery of 789 people at the rate of 13.95%.

MP and Rajasthan also have a poor record of 9.29% and 12.17% respectively, in the recovery of infected patients. While Indore is a major contributor in MP, Jaipur in Rajasthan has also played a similar role in the spiking of the cases.

There are many states like Odisha, Goa, Bihar and Himachal Pradesh where recovery rate looks very good with nearly 30% or more. But, experts have cautioned that all such states have tested a very small number of patients and any conclusion can’t be drawn at a smaller number of infections. 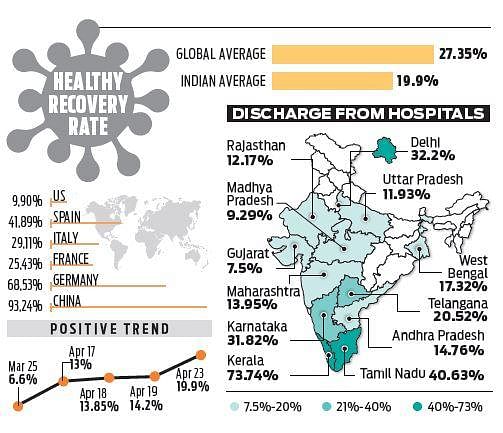