"Considering the prevailing situation in UK. Govt. of India has decided that all flights originating from UK to India to be suspended till 31st December 2020," the aviation ministry said in a tweet.

NEW DELHI: India on Monday announced that it will temporarily ban flights from UK to the country after the emergence of a new and highly infectious strain of the coronavirus in Britain.

"Considering the prevailing situation in the UK, the Indian government has decided that all flights originating from the UK to India shall be temporarily suspended till 11:59 pm, 31st December. This suspension to start w.e.f. 11.59 pm, 22nd December," the Ministry of Civil Aviation tweeted on Monday.

"As a measure of abundant precaution, passengers arriving from UK in all transit flights (flights that have taken off or flights which are reaching India before 22nd Dec at 23.59 hrs) should be subject to mandatory RT-PCR test on arrival at the airports concerned," the ministry added. 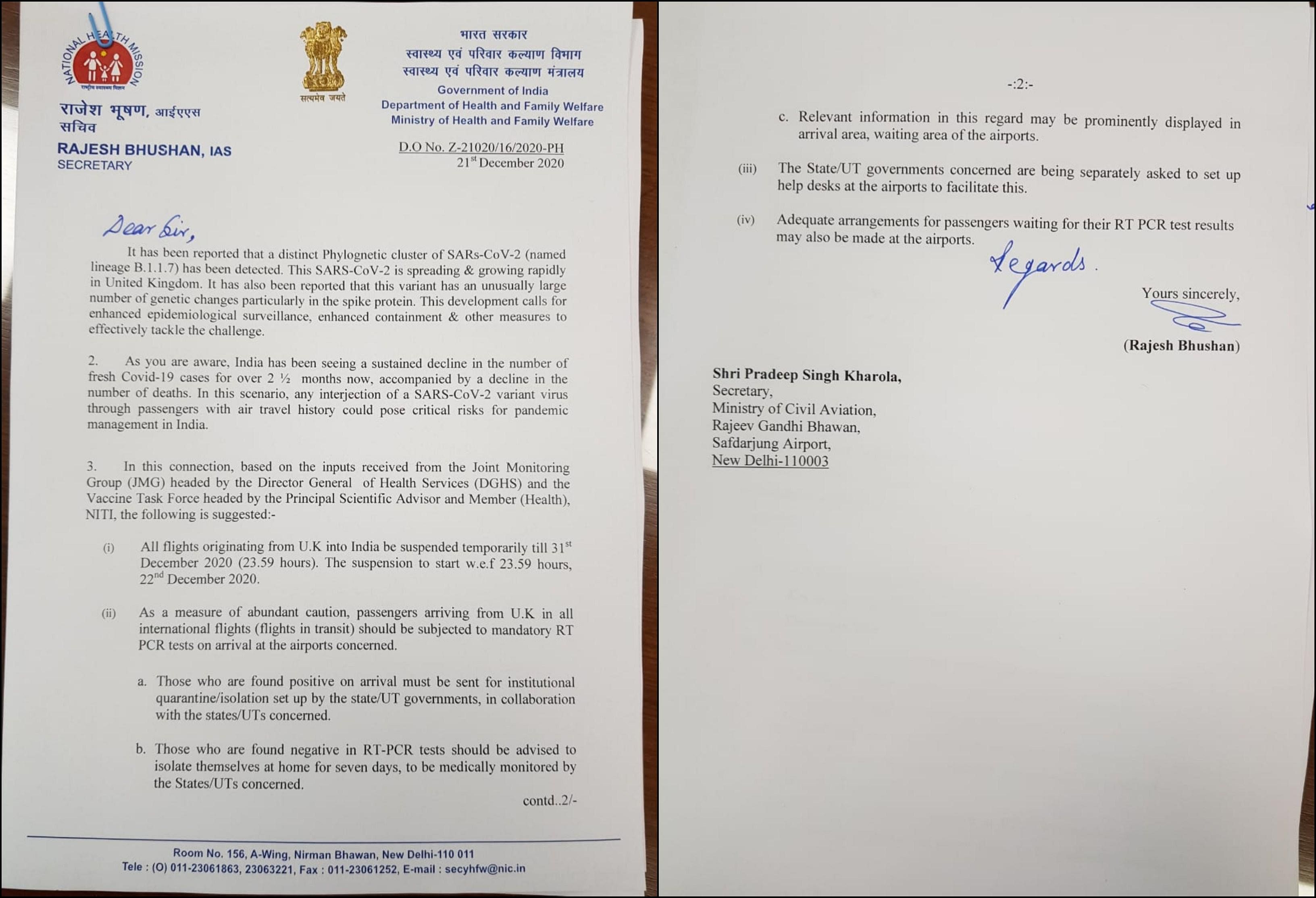 Earlier, many Chief Ministers including the Delhi CM had on Monday taken to Twitter to urge the central government to ban all flights from the UK to India amid fears that the mutated coronavirus strain could be a "super spreader".

Kejriwal tweeted, "New mutation of coronavirus has emerged in the UK, which is a super-spreader. I urge the central govt to ban all flights from UK immediately."

The call for banning international flights to India from the UK came after several countries announced similar steps to contain the new form of COVID-19.

Meanwhile, several European Union nations including France, Germany, the Netherlands, Belgium, Austria and Italy have moved to ban flights from the UK on Sunday and others were considering similar actions in a bid to block the new strain from establishing a strong foothold on the continent.

So, why is the recent strain found in England so concerning?

Health experts in the UK and US said the strain seems to infect more easily than others, but there is no evidence yet it is more deadly.

Explainer: Are new COVID-19 strains deadlier than previous ones? Here's what we know

Patrick Vallance, the British government’s chief scientific adviser, said that the strain “moves fast and is becoming the dominant variant,” causing over 60% of infections in London by December.

The strain is also concerning because it has so many mutations - nearly two dozen - and some are on the spiky protein that the virus uses to attach to and infect cells. That spike is what current vaccines target.

"I'm worried about this, for sure," but it's too soon to know how important it ultimately will prove to be, said Dr Ravi Gupta, who studies viruses at the University of Cambridge in England. He and other researchers posted a report of it on a website scientists use to quickly share developments, but the paper has not been formally reviewed or published in a journal.

Will people who get COVID-19 from an old strain be susceptible to the new strain? Will it undermine vaccines?

President-elect Joe Biden’s surgeon general nominee, Vivek Murthy, said Sunday on NBC’s Meet the Press that there's “no reason to believe that the vaccines that have been developed will not be effective against this virus as well.”

Vaccines produce wide-ranging responses by the immune system beyond just those to the spike protein, several experts noted.

The possibility that new strains will be resistant to existing vaccines are low, but not "inexistent", Dr Moncef Slaoui, the chief science adviser for the US government's vaccine distribution effort, said Sunday on CNN's State of the Union.

"Up to now, I don't think there has been a single variant that would be resistant," he said. "This particular variant in the UK, I think, is very unlikely to have escaped the vaccine immunity."

(With inputs from AP)