"Abrogation of Article 370 will bring an earthquake that will separate Kashmir from India," Abdullah had said, according to the PM.

Fact-checking websites, BoomLive and AltNews, have revealed that the PM quoted an article from satirical website Faking News to attribute a fake remark to the former CM on the abrogation of Article 370.

"Abrogation of Article 370 will bring an earthquake that will separate Kashmir from India," Abdullah had said, according to the PM.

Speaking on the separatist sentiments of Kashmiri leaders, currently, under detention, the PM can be heard quoting Omar Abdullah as saying, "If Article 370 is abrogated, an earthquake will come that will separate Kashmir from India."

The official Twitter handle of the Bhartiya Janata Party also put out a tweet quoting Modi's speech where he mentions the false quote. 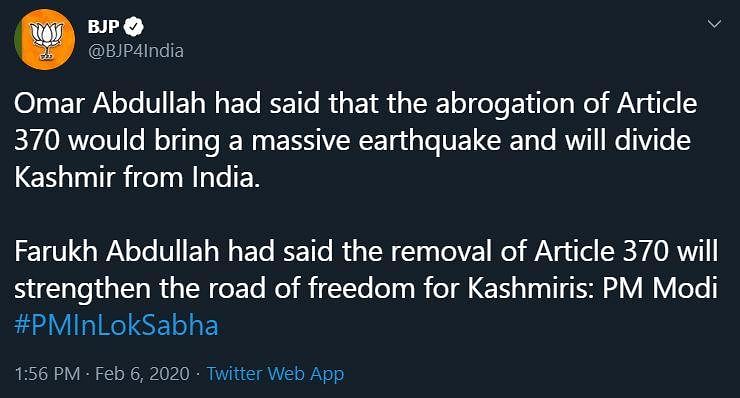 The Prime Minister reportedly picked this from a satirical article published on Faking News on May 28, 2014.

Published under the username 'idiot420', the article details a 'sensational revelation' made by Abdullah on how 'removing Article 370 might cause sudden movement of tectonic plates in the region resulting into separation of Kashmir from India.'

The satirical piece further details that Omar Abdullah has held on to this secret which his family came to know after one of his forefathers found a quote written on a piece of stone in a remote area of Kashmir, which read, 'Three seventus removam, dhartis fatam, Kashmirus separatum.'

The satire piece in May 2014 came a day after Abdullah objected to a comment by Jitendra Singh, the then MoS in the Prime Minister's Office on the removal of Article 370.

The fact-checking website Altnews states that even searching on Google with relevant keywords, no news reports were found where Omar Abdullah has been quoted making the statement cited by the PM in the Lok Sabha on February 6.

Faking News is a self-acclaimed satirical website that indulges in humorous and sarcastic takes on current topics.

The 'About Us' section of the website also has a disclaimer that states the content is a work of fiction, unless categorized as 'Editorial'.

Stay up to date on all the latest Nation news with The New Indian Express App. Download now
(Get the news that matters from New Indian Express on WhatsApp. Click this link and hit 'Click to Subscribe'. Follow the instructions after that.)
TAGS
Narendra Modi Omar Abdullah Kashmir Article 370