2021 Assam elections: Twin challenges for BJP in the form of Congress allies and regional parties

The primary challenge for the BJP is tie up of Congress and minority-based AIUDF along with the birth of two regional forces - Asom Jatiya Parishad and Raijor Dal.

GUWAHATI:  The BJP, which heads Assam's three-party ruling coalition, is faced with an uphill task to achieve its goal of winning 100 out of the state's 126 seats in the upcoming Assembly polls. Cashing in on the Modi wave, the saffron party and its allies Asom Gana Parishad (AGP) and Bodoland People's Front (BPF) had bagged 86 seats in the 2016 elections. 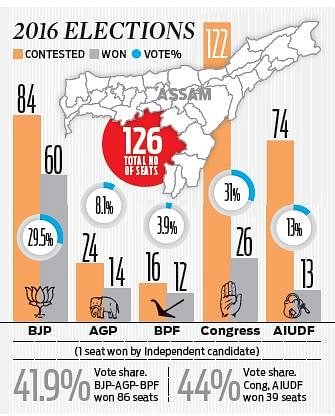 It had also reaped the dividends of antiincumbency and alleged large scale corruption during the previous Congress regime. The scenario this time around, however, is completely different. The primary challenge for the BJP is tie up of Congress and minority-based All India United Democratic Front (AIUDF).

These two former foes have formed a six-party grand alliance ahead of the polls. The BJP had contested in 84 seats in the 2016 elections, bagging a vote share of 29.5 per cent, less than that of the 31 per cent of the Congress, which had won 26 seats out of the 122 contested seats.

Also, the combined vote share of Congress and AIUDF was more than that of the AGP in two seats which were among the 14 seats that the regional party had won. The Congress and the AIUDF did not have any alliance in the last election.

Now that they would fight together and would have a seat-sharing arrangement, the split of anti-BJP votes is likely to be prevented Secondly, the AGP had dished out a spectacular performance in the last election by riding piggyback on the BJP. It had won 14 of the 24 seats it contested.

However, the birth of two regional forces - Asom Jatiya Parishad (AJP) and Raijor Dal - is expected to cost the AGP dear. That the BJP and the AGP are nervous following the AJP’s emergence in the political spectrum is evident from their constant vitriol of the regional party.

Political scientist Akhil Ranjan Dutta of the Gauhati University said the Congress- AIUDF alignment will have an impact in Central Assam. "The AJP will target the votes of the AGP and the BJP. I feel they (AJP) will cause damage to both BJP and AGP to some extent. The AASU said it would support the AJP. If they do it, both BJP and AGP will suffer," Dutta observed.

He said the BJP was distributing its resources in a targeted manner, particularly targeting the tea community. "They have a substantive presence in tea areas. Not only are they distributing the resources, they are also giving overriding priority in political representation. Pallab Lochan Das, Rameswar Teli and Kamakhya Prasad Tassa, all of them from the tea community, are now MPs," Dutta said.

The five Lok Sabha constituencies of Tezpur, Lakhimpur, Dibrugarh, Jorhat and Kaliabor have 48 Assembly segments. The tea workers have a huge influence in 35-37 of them.