NEW DELHI: Covaxin, India’s first indigenously developed Covid-19 vaccine, administered to people in seven more states on Monday, but sources said the efficacy results of the doses from its late-stage trial could still be a few weeks away. 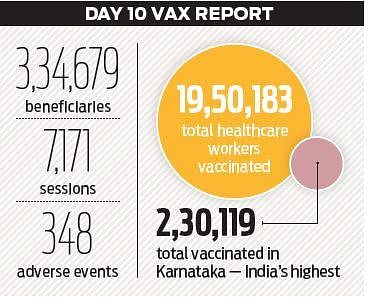 Till Sunday, only 12 states were using both Covaxin and Serum Institute of India-manufactured Covishield.

Last week, Bharat Biotech had said that it had successfully administered second dose Covaxin to 13,000 or half of the total volunteers as part of its ongoing Phase-3 clinical trials of the jab.

The company had completed enrolment of the total 25,800 volunteers for the efficacy trial after it received permission for the sale or distribution of Covaxin for restricted use in emergency situations in the public interest as an abundant precaution, in clinical trial mode, from the DCGI.

The vaccine-maker in the fact sheet on Covaxin, posted in its website, had said the clinical efficacy of the vaccine is yet to be established and is being studied in Phase-3 clinical trial and hence, it is crucial for vaccine recipients even after taking the shots, to maintain all other precautions related to Covid-19 need not be followed.

The government, which has been aggressively campaigning for the prioritised beneficiaries to come forward for the jabs that both the vaccines approved in the country are “safe and efficacious”.

Now we are on Telegram too. Follow us for updates
TAGS
Bharat Biotech Covaxin Covid-19 vaccine