'The Pegasus leak is a massive breach of Indian People's trust and their privacy,' Patil said in a tweet on Monday.

MUMBAI: Maharashtra Minister of State for Home and Information Technology Satej Patil on Monday slammed the Narendra Modi government at the Centre over the Pegasus spyware issue and said the latter was ruining the country's democratic values.

An international media consortium reported on Sunday that more than 300 verified mobile phone numbers, including of two serving ministers, over 40 journalists, three opposition leaders and one sitting judge besides scores of business persons and activists in India could have been targeted for hacking through an Israeli spyware sold only to government agencies. 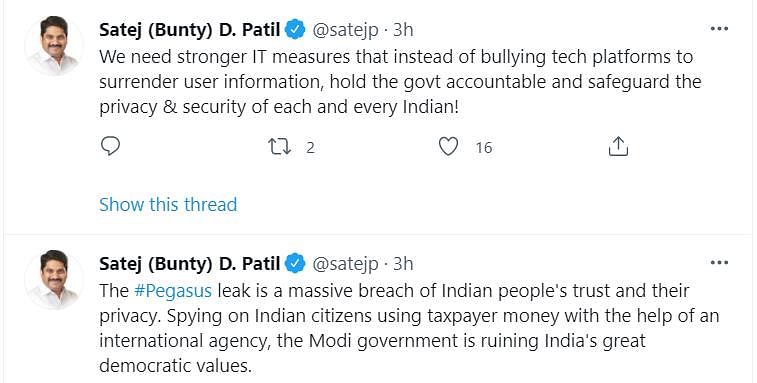 Patil, in a tweet on Monday, said, "The#Pegasus leak is a massive breach of Indian People's trust and their privacy. Spying on Indian citizens using taxpayer money with the help of an international agency, the Modi government is ruining India's great democratic values."

"We need stronger IT measures that instead of bullying tech platforms to surrender user information, hold the govt accountable and safeguard the privacy & security of each and every Indian!" the Maharashtra Congress leader further tweeted.

Now we are on Telegram too. Follow us for updates
TAGS
Narandra Modi Sajet Patil Pegasus spyware