Willow healing for scars of the past

Most of Rwanda are still trying to come to terms with the genocide in 1994. But over the last decade, they have found a new sport to help their people reconciliate. Refugees returning to the country b

Sport has the power to change the world. (...). It speaks to youth in a language they understand. Sport can create hope where once there was only despair. It is more powerful than government in breaking down racial barriers.”Nelson Mandela

The genocide which took place in Rwanda is forever embedded in its history. A plane carrying the country’s moderate Hutu President, Juvenal Habyarimana was shot down on the morning of April 6, 1994. Hutus — the majority — blamed the Tutsi minority for the incident (they had been fighting for centuries and this had already resulted in many Tutsis fleeing to Kenya or Uganda). A couple of hours after the President’s assassination, it began. Moderate Hutus and Tutsis were killed mercilessly.

The events which took place at L’Ecole Technique Officiele (ETO), a secondary school on the outskirts of Kigali, the capital, captured its essence. Tutsis had arrived en masse believing they would get protection from a sizable number of Belgian UN soldiers there. Unknown to them, the peacekeepers were already planning to leave. Moderate Hutu Prime Minister, Agathe Uwilingiyimana, and 10 Belgian soldiers guarding her were killed on the first day of the genocide and this forced Belgium to withdraw their remaining troops.

Four days later they left. Over the next few hours, extremist forces took control of close to 5000 Tutsis who had holed up there. Later, they were taken to a nearby hill and killed. A survivor, Karasira Venuste, when reliving the incident to The Atlantic, a US-based website, said about 100 escaped. He lived “only because he was buried under dead bodies,” the website said. They were rescued thanks to the Rwandan Patriotic Front (RPF). The RPF eventually ended the genocide after 100 days.

In the months and years after it finished, people living in exile started coming back, wanting to rebuild lives in the land of their ancestors. They did not have much to begin with, skills were based on survival alone. More than a handful, though, while living in Kenya and so on, had turned towards a colonial sport to help them forget stories of horrors past. Cricket.

Till 2010, Alby Shale had never stepped foot in Rwanda, the land of a 1000 hills. In the last week of October 2017, Alby honoured a seven-year promise — opening the Gahanga International Cricket Stadium, the arena with the first grass pitch in the East African country. 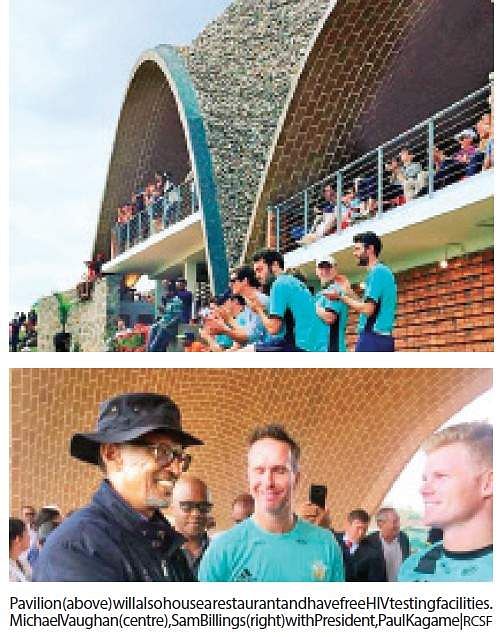 How did Alby get to where he was? Christopher, his father and an associate of David Cameron, had undertaken humanitarian projects there. During a trip, he was struck by people playing cricket. In 2010, Christopher decided to take Alby along with him. It was clear to them that the sport was acting as a social vehicle. Heck, Hutus and Tutsis were in the same team for the first time in generations.
A dream formed. Christopher hoped he could collect sufficient funds to give them its first international class stadium. But tragedy struck as Christopher passed away in 2011. The mantle passed on to Alby, who was up for it.

In 2011, Alby co-founded the Rwanda Cricket Stadium Foundation (RCSF) with the hope of realising his father’s dreams. On October 28, 2017, Paul Kagame, President of Rwanda, opened to the public the Gahanga Stadium. Two teams, captained by Michael Vaughan and Herschelle Gibbs, played the first ever match. The South African was a late replacement for Brian Lara, who had joined as a patron of RCSF six years ago.

Alby’s description of the current state of sport in the country paints a not-so-good picture but the stadium is going to be a massive weapon. “Thousands of young Rwandans, male and female, now play cricket in orphanages, primary and secondary school and universities,” he tells SS. “A club league, three club tournaments and schools and universities competitions make up an 11-month formal cricketing calendar. There is potential for the game to grow and we hope to provide a platform.”

An impediment to said growth is resource. The only other stadium of note is well known. It is the place where close to 5000 people were slaughtered near ETO. “The first cricket ground in Rwanda was created on the site of the infamous massacre,” Alby says. “Before a ball could be bowled, grass had to be cut which revealed remains of victims.” Sunday league players from most countries would refuse to play on it but most of Rwanda’s international players honed their skills there. “It is still used today,” the 27-year-old points out. “It is made up of a concrete wicket covered rather haphazardly with worn matting; an old, over-used uneven net which can take your head off.” The outfield is a completely different story. “It is dotted with ants nests and hidden (snake) holes that make fielding a bit of a lottery.”

The Daily Telegraph, one of the very few media houses to have written on cricket in the country, spoke to Byiringiro Audifax, the country’s opening batsman. He lost his father to the killings. His family still don’t know where and when he was killed. Now 24, Byiringiro  coaches young kids hoping it will make a difference.

Eric Dusingizimana, the captain of the national team, is asked a question — a possible link between the genocide and cricket. He is in the process of explaining it to this newspaper but bins his thought process to mention, in full, the above-mentioned Mandela quote before continuing. “It is more than a game for us,” he says. “It is life itself and as a game which comes after the genocide, it is really playing a part in the healing process. We have stories/testmonies from different players.” Audifax’s testimony is an example.

Dusingizimana, who also doubles up as general manager of RCSF, believes in the social construct of sport. “RCSF was formed in 2011 to build and manage on a non profit basis, an international cricket ground with a vision of facilitating reconciliation through the essential values of cricket. It is thanks to Christopher Shale’s noble vision (...) after seeing how the game brought joy to the people of a country with a troubled past.”

The 30-year-old hopes to realise the country’s ultimate ambition in the sport. “The road we are on is very long but we want to play... the World Cup.” The challenge is huge. There are eight rungs between them and the promised land — internationals at a decent level and World Cup qualifiers. But do not write them off. It has been done before. In 1995, a refugee, Allah Dad Noori, returned to Afghanistan to set up the country’s cricket federation. They played in the World Cup 20 years later.

Christopher loved Rwanda and he loved cricket. It was with pride that he watched Alby Shale (his son) play cricket against a Rwandan side, and he instantly saw how the game brought joy to the people of a country with such a troubled past. It was typical, both of his desire to help others and his ability to think big, that rather than bemoaning a lack of facilities, he came up with this ambitious plan to raise money to build a proper home for cricket in Rwanda. It now falls to us to realise his vision.
RSCF Co-Founder, Edo Mapelli-Mozzi 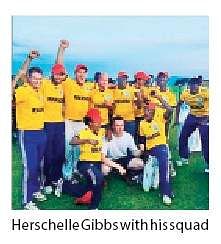 Cricket Builds Hope
The Rwandan Cricket Stadium Foundation (RCSF), the British-based charity behind the building of the stadium in Gahanga, has been rebranded as ‘Cricket Builds Hope’, a social project which includes cricket at the heart of social change. The new stadium itself isn’t just for cricket alone. It’s going to be for the community, with HIV testing and so on. Alby Shale, a key part of this organisation, hopes the movement can spread beyond Rwanda in the months to come.

Captain Eric Dusingizimana, in 2016, set a Guinness World Record, for the ‘longest individual net session’. He started at 8am on May 11 and finished his stint at 11am on May 13. He did this to spread awareness about Rwanda’s love for cricket in the international community apart from trying to raise funds for the new stadium which was being constructed at that time. Even the likes of Tony Balir, ex Prime Minister of Britain, bowled to Eric. He broke the record of India’s Virag Mare, who had batted for 50 hours straight in 2015. Interestingly, Alby Shale is a former holder of this record. He batted 26 hours straight in 2015 to raise money for the stadium.

Progress
of cricket
1999
A group of former exiles founded the Rwanda Cricket Association
2003
Got Affiliate membership from International Cricket Council
2004
Made international debut, against Mozambique at the African Affiliates Championship
2011
Advanced to the ICC Africa Division 2 Championship after winning the Championship for Division 3. They have since been relegated back to Division 3
Numbers
that paint a story
1
Number of authentic grass pitches in the entire country. Only two stadia of note
15
Clubs with a cricket team. There is also a women’s national team and age-group teams at various levels
4500+
Number of players
$150,000
Amount of funding the country gets from ICC each year
1.3mn
Cost of new stadium, in US$