IPL 2019 Final, MI vs CSK: History on the cards in Hyderabad

Record gives Mumbai edge over Chennai going into IPL title clash, but this is a day when past may not matter

HYDERABAD: To say it is a mouth-watering clash would be an understatement. They are arguably the two best teams the format has ever seen. And they will be up against each other for the fourth time in an IPL final. Chennai Super Kings and Mumbai Indians have played the best cricket in this edition, but even before the encounter ensues, there is a clear favourite in the latter.

While occupying top spot on the points table makes their case, the fact that they have humbled Chennai on all three occasions they met this season, further solidifies that argument. When the three-time champions square off at Rajiv Gandhi International Cricket Stadium on Sunday, the pressure will be more on MS Dhoni’s side.

Their batting has been below par, and secondly, their opponents seem to have very few chinks in their armour, as they have played all-round cricket for a major part of their campaign. Shane Watson, Chennai’s batting mainstay, has not been that impressive, with just 318 in 16 matches at 19.87. Hence, Chennai have not been able to get the kind of start they would have fancied. Others such as Suresh Raina and Ambati Rayudu have not been able to replicate the type of form they had shown in the earlier editions. The duo average around 25. The bulk of weight in batting has been carried by the skipper, as he sits at the 12th spot in the scorers’ list with 414 in 14 matches (103.50).

A lacklustre performance in the willow-wielding department has been countered well with a brilliant collective bowling efforts. The quartet of Deepak Chahar, Imran Tahir, Harbhajan Singh and Ravindra Jadeja have stuck their necks out on most occasions. The first three are in the top-10 on the wickets table.

However, the openers seem to have gained form just in time — with half-tons, as they thrashed Delhi Capitals by six-wickets on Friday to enter the summit clash.

“For us, it’s just been a case of...if you look at all of the batters in the top six...maybe apart from MS, who’s been really consistent throughout the competition, everyone has find it difficult to get consistency. And we’ve just put it down to...batting in Chennai has been really tough this season. So it’s important not to take that with you if you go to other grounds,” said Du Plessis after winning Qualifier 2 on Friday.

“I feel when we’ve gone away and played in different conditions, we’ve played it better. Tonight, once again, the wicket was a little bit on the slower side. It did help us that we were batting second and we knew how hard we had to go. But the experienced team that we are, we look forward to big matches. And Chennai over the years have played well in big matches. So as a unit, we’re just focusing on...whatever’s happened in the past means nothing,” added the South African.

Mumbai have fewer worries as they have been the most balanced side, with equal proficiency in all departments. Even unheralded youngsters such as wrist-spinner Rahul Chahar have played a big role. 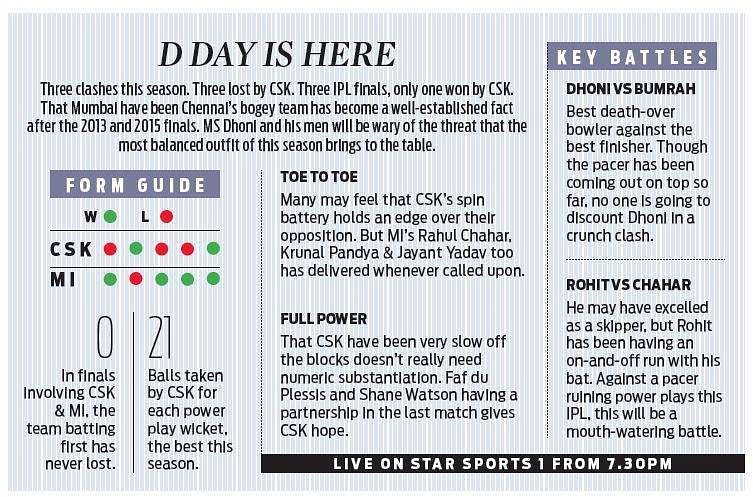 Now we are on Telegram too. Follow us for updates
TAGS
IPL 2019 MI CSK