In the letter addressed to editors of various vernacular dailies and police, the Maoists Central Committee issued a death threat to MLA Giddi Eeswara.

VIJAYAWADA: Three weeks after the killing of Araku MLA Kidari Sarveswara Rao and former MLA Siveri Soma at Dumbriguda mandal in Vizag Agency, a two-page letter purportedly released by the Maoists Central Committee (MCC) claiming responsibility for the killings, created a flutter in the social media platforms on Tuesday. 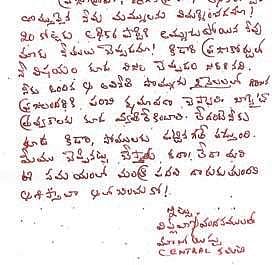 The police termed the letter fake, but added that it will be examined.  In the letter addressed to editors of various vernacular dailies and police, the MCC issued a death threat to MLA Giddi Eeswaramma.

The MCC ‘admitted’ that it killed Sarveswara Rao and Siveri Soma on September 23 for “betraying tribals.” The MCC members termed the two deceased leaders  “cheaters” and said they were given punishment in Praja Durbar (people’s court) for their wrongdoings. In the letter, it is also written that they (Maoists) warned several times against illegal quarrying and found fault with the duo for supporting the government in bauxite mining.

“For their own benefits, they betrayed tribals and became government’s stooges. They (MLA and ex-MLA) too confessed their wrongdoings. Hence the punishment,” the MCC claimed.

The MCC also asked police not to kill them as they are “fighting for the rights of tribals and the poor.”  They warned MLA Giddi Eeswaramma that she will also get the same punishment like the two if she failed to distribute the money amassed through corrupt practices among tribals in two months.  “The letter seems to be fake as it has no authentication from Maoists and there is a difference in their language style. We request the people not to circulate it on social media,” DGP RP Thakur said.

Now we are on Telegram too. Follow us for updates
TAGS
Araku MLA killing Maoist letter Maoists Central Committee