Fishing on high seas is a perilous activity and the fishermen ply their trade risking their lives to support their families.

VIJAYAWADA: The state government has initiated several measures to improve the blue economy, which is not only expected to rake in more revenue, but also augment employment. According to the Socio-Economic Survey, fish production improved to 41.75 lakh metric tonnes (MT) in 2019-20 compared to 39.92 lakh MT in the fiscal year 2018-19.

Andhra Pradesh has favourable agro-climatic conditions for growth of fisheries and aquaculture sector. Contributing over 24 per cent to national fish production, the State is a major exporter of shrimps in India with a share of 36 per cent in total value of sea food exports. The sector is also given employment to 14.5 lakh persons.

To utilise the State’s coastline, construction of fishing jetties and fish landing centres have been planned and, to this end, Rs 100 crore was allocated during 2019-20. Promotion of deep sea fishing, open sea cage and seaweed culture, promotion of alternative species for brackish water aquaculture, promotion of value-added products, cold chain facilities, promotion of new technologies, cage culture in suitable reservoirs, supply of nets, boats and other inputs on subsidy basis, aqua zonation for area expansion, organic aqua farming are part of strategy adopted by the government.

Apart from improving infrastructure, the State, focusing on welfare of the fishermen, is implementing YSR Matsyakara Bharosa to provide financial aid to them, during the ban on fishing in the sea. Under the said  programme, relief being provided to the fishermen has been enhanced from Rs  4,000 to Rs  10,000 per family.  In 2019-20, an amount of Rs  102.33 crore was spent to benefit 1,02,332 fishermen families.

Fishing on high seas is a perilous activity and the fishermen ply their trade risking their lives to support their families. In case the fishermen lose their lives, a compensation of Rs  5 lakh is paid per family till 2018-19. The same was doubled in 2019-20 to Rs  10 lakh. 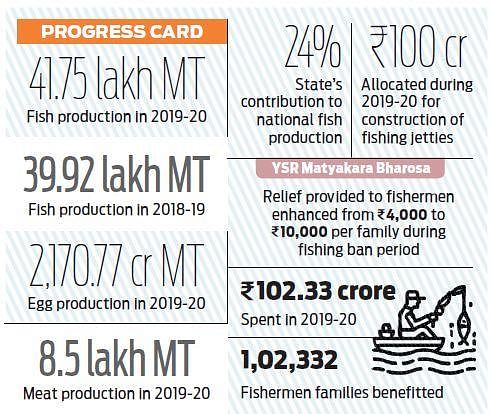 Now we are on Telegram too. Follow us for updates
TAGS
Blue Economy Andhra Government