The virulent spread of Covid during the second wave is evident as the 1,941 fresh infections emerged from just a little over 31,000 samples.

VIJAYAWADA: Andhra Pradesh reported close to 2,000 new infections in the 24 hours ending Tuesday 9 am taking the Covid-19 tally past the 9.10 lakh-mark. The daily count of 1,941 is the highest since November 10, 2020 when 1,886 cases emerged from 67,000-odd samples tested. The virulent spread of Covid during the second wave is evident as the 1,941 fresh infections emerged from just a little over 31,000 samples.

Apart from the five Covid hotspot districts of Guntur, Chittoor, Krishna, Nellore and Visakhapatnam, Srikakulam too witnessed a sharp spike in infections by recording 102 new cases. Guntur reported the highest daily count of 424, followed by Chittoor with 323. The five hotspot districts accounted for 1,550 of the total 1,941 new infections. With the surge in cases, the overall tally of Nellore went past the 64,000-mark, while the cumulative count of Srikakulam breached the 47,000-mark. The daily count of Vizianagaram and West Godavari also went into double digits. 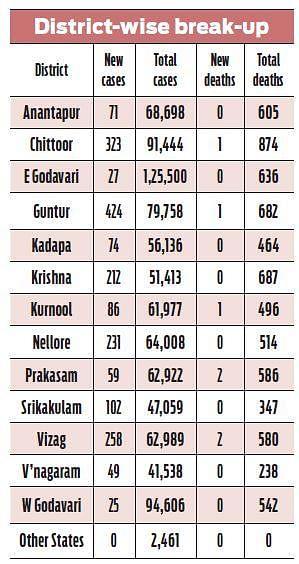 The recoveries in the 24 hours span were less than half of the daily count taking the total number of active cases to 11,809, the highest since November 28, 2020. Five of the total 13 districts in the State have more than 1,000 active cases each. Chittoor has the highest caseload of 2,116, while Vizianagaram has the lowest number of 173 active cases. The Covid toll increased to 7,251 with seven fatalities. Prakasam and Visakhapatnam reported two deaths each, Chittoor, Guntur and Kurnool one each.

With the spike in Covid cases in Krishna district, Collector A Md Imtiaz directed government and private hospitals to ready at least 1,000 beds to treat virus infected persons. Imtiaz, who held a review meeting with representatives of government and private hospitals, said cases of new strain of Covid were reported in the district during the second wave. A study conducted by the district administration revealed that the virus is spreading rapidly due to violation of Covid guidelines by the public, the Collector said.

Giving out the statistics of the Covid spike, Imtiaz said 2,800 positive cases were reported in the district in December, 830 cases in January and 250 cases in February. In March, the number of cases increased to 1,600. A man returned from an African country had tested positive for a new coronavirus strain. “We have intensified the sample testing by adopting the 3T formula of Testing, Tracing and Treating to curb the spread of Covid in Krishna. In all, 19 hospitals have been geared up to treat Covid cases. They include New Government General Hospital in Vijayawada, District Hospital in Machilipatnam, Pinnamaneni Siddhartha Institute of Medical Sciences at Chinna Avutapalli, Nimra Hospital at Ibrahimpatnam and 15 other hospitals located across the district,” Imtiaz said.

Joint Collector (Welfare) L Siva Shankar said a nodal officer will be appointed to monitor the treatment of Covid cases by government and private hospitals. “We have identified 1,000 beds in government and private hospitals across the district to treat Covid cases. About 1,000 more beds are also being readied at Covid care centres. A district level control room will be established to monitor the situation and collect the details of the virus infected persons. Based on the performance of the hospitals, ranks will be given to them with a score of 2,500. Facilities like ICUs, availability of beds, oxygen supply and other things will be considered to award ranks to hospitals,” he said.

20 ANU students test positive
About 20 students and staff members of Acharya Nagarjuna University in Guntur tested positive in the past one week. ANU Registrar K Rosaiah on Tuesday informed that classes for students will be conducted online till April 14 as a precautionary measure

Relief package for theatres
The State government on Tuesday announced a relief package for the cinema theatres hit by nationwide lockdown. The package includes waiver of fixed electricity charges of theatres for three months and provision of 50% interest subvention on loans

Now we are on Telegram too. Follow us for updates
TAGS
Andhra Pradesh daily covid cases