The bench said it will take up the matter for hearing on Thursday.

BENGALURU: The State Government on Wednesday moved the Karnataka High Court seeking direction to appoint a Claims Commissioner to estimate the damage, fix liability and award compensation with respect to mass destruction of properties in the violence in DJ Halli and KG Halli police limits in the city on the night of August 11.In 2009, the Supreme Court said that the high courts may take suo motu action and appoint a Claims Commissioner to investigate the damage caused and award compensation by affixing liability on the perpetrators of the crimes and the organisers of the event, in cases where mass destruction of private and public property and injury to persons takes place due to protests and riots.

Based on this, the Advocate General mentioned the issue of appointing a retired high court judge or district judge as a Claims Commissioner before a division bench of Chief Justice Abhay Shreeniwas Oka and Justice Ashok S Kinagi. The bench said it will take up the matter for hearing on Thursday. 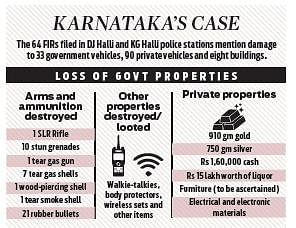 In the petition filed before the court in response to the report of the city police commissioner, the State Government stated that there was significant and large-scale destruction of both public and private property due to the violence on August 11 night. The government stated that the mob also looted some establishments despite efforts by police and that more than 80 police personnel were injured.

IN the petition, presented with lists of damaged and destroyed properties along with a list of accused in relation to 64 FIRs registered over the incident, the state said 33 government vehicles and 90 private vehicles were either burnt and destroyed or damaged. Damage was also caused to the police station buildings of DJ Halli and KG Halli as well as MLA Akhanda Srinivasa Murthy’s residence, it said. In addition, eight buildings were also damaged by acts of vandalism and arson. Arms and ammunition used by the police were also snatched and destroyed by the mob, said the state.

Three advocates to represent state
The State Government appointed advocates P Prasanna Kumar, P Tejus and B O Chandrashekar as Special Public Prosecutors to represent the state before the courts in cases pertaining to the violence. The appointments were made in response to the appeal made by the DG&IGP.

Now we are on Telegram too. Follow us for updates
TAGS
Karnataka High court Bengaluru violence Bengaluru riots