Karnataka on alert over locust invasion

BENGALURU: Karnataka is on the edge with locust swarms making their way into Maharashtra. They have defoliated precious citrus plants in Nagpur and are roosting in neem and acacia trees. According to official sources, the National Disaster Management Authority (NDMA) has cautioned Karnataka that the next 48 hours are critical watch period for the locust swarm to enter the state because of the wind direction. 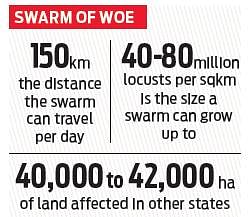 Sensing the emergency and to take stock of the situation, Chief Secretary TM Vijaybhaskar held a meeting on Wednesday with Additional Chief Secretary and Development Commissioner Vandita Sharma, Dr Shylesha, entomologist, and professors Dr N Srinivasa and Dr ARV Kumar from the University of Agricultural Sciences.

“Till May 30 the wind direction will remain southwards because of which, the locusts could enter the state. After May 30, the wind direction will change to northwards making Telangana and Chhattisgarh vulnerable to locust wave,” said Dr AN Shylesha, Principal Scientist, Entomology, National Bureau of Agricultural Insect Resources (NBAIR).

“The wind direction may have changed due to the cyclonic disturbances caused by Amphan. Locusts attack states like Gujarat, Rajasthan, Punjab and Madhya Pradesh, which are closer to Pakistan. Due to Amphan their normal route has changed,” said Dr Shylesha. The state government has issued advisories to farmers in the Maharashtra-Karnataka border districts – Koppal, Vijayapura, Bidar and Yadgir -- to “remain vigilant and ward off the locusts by beating drums and making other loud sounds to displace their movement and use neem-based pesticides like Azadirachtin 10000 ppm and Neem Aza to protect high value crops.

In case of entry and to protect the standing crops, the government has advised the farmers to spray stronger pesticides like chlorpyriphos. Dr Shylesha said that the NBAIR along with Maharana Pratap University of Agriculture & Technology,  Udaipur, Punjab Agricultural University, Ludhiana, and Anand Agricultural University, Gujarat, will be testing entomofungal pathogens for management of locusts at breeding places.

Karnataka unlikely to be hit: Minister
Bengaluru: Agriculture Minister B C Patil has said Karnataka is unlikely to be affected by desert locusts which are currently swarming north-western states. The minister who held a meeting with agriculture officials, entomologists and academicians from the University of Agriculture Sciences told reporters on Thursday that as winds blowing southwards since May 26 are likely to change the direction, there are little changes of the locusts reaching Karnataka.

“The locusts are 450 km away from Bidar border”, he said. Patil said the state is prepared to tackle the issue in case the wind direction does not change and officials at district and taluk levels are directed to take action if needed. A committee headed by deputy commissioner has been constituted in every district to tackle the situation, he said. Officials are also visiting Bidar, Koppal, Kalaburagi, Yadgir and other places, he added.

Now we are on Telegram too. Follow us for updates
TAGS
locust swarms Karnataka