She is a vocal feminist, a vegan, an animal lover, a climate activist and an inspiring individual overall.

BENGALURU: “Most people who have stepped into the local climate change activism circles in Bengaluru will know Disha Ravi,” is how Disha’s friend, also a member of Fridays For Future (FFF), a global climate strike movement that she is a co-founder of, says of her.

The 21-year-old Disha was arrested by the Delhi police for editing and disseminating a ‘toolkit’ (basically, a Google document) in support of farmer’s protest and is facing charges of sedition and spreading disharmony and hatred among sections of society. On Sunday, she was remanded in five-day custody of the Delhi police.

But contrary to the “pro-Khalistan” narrative being thrown up, besides charges of sedition slapped against her, what her close friends and those who have worked with her say put her in a humane light. Those who know her and follow her work say the allegations against her are far from truth. “Disha has always treated people them with kindness, respect, humility and empathy. She is a vocal feminist, a vegan, an animal lover, a climate activist and an inspiring individual overall. 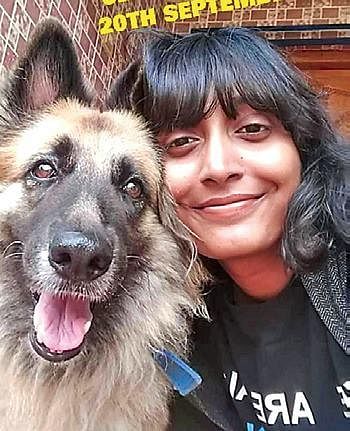 She is someone who hasn’t had it easy in life, but is very modest about it. She wants to create a world where everyone is treated equally. Coming from a family with a history of farming, these protests hit home for her. She wishes to help farmers get their voices heard. She could not have had any ulterior motives whatsoever. In fact, she is someone who does not believe in dividing people. All these allegations go completely against what I know of her and what she has stood for,” says one of her close friends, who wished not to be named.

A Bachelor of Business Administration graduate (2019) from Mount Carmel College, and a staunch vegan and an environmental activist, Disha works as a culinary experience manager with a company that makes vegan products. Disha’s parents — Manjula, a home-maker, and Ravi, an athletics coach in Mysuru — have refused to speak to the media and are exploring various legal avenues to help their only daughter. Her parents are said to have supported Disha in what she believes in, but she was reportedly motivated — according to her interview last year — to be a climate activist after watching her farmer grandparents endure the vagaries of climate change.

Mukund Gowda, an audit consultant and a volunteer at Citizens for Bengaluru who met her two years ago at an event for citizen-based climate activism, says Disha led the FFF campaign here. “Disha would invite us for clean-up drives, protests against tree-cutting in Sarjapur and Shivananda Circle, lake conservation projects, especially Ulsoor Lake, etc. She is a passionate advocate of how human events affect global warming and climate change.

She has pushed for zero-plastic usage, and use of biodegradable items,” he says, Explaining her passion for climate activism, he says she would bunk classes on Fridays to attend the FFF activities and her teachers at Mount Carmel College understood the cause she stood for and permitted her absence. “She was happy that her college gave her a chance,” Mukund says.“No matter how scarce the turnout at protests was, she was always there with her placards, be it at Town Hall or any other place,” he adds.

A former BJP IT cell volunteer and fellow member from FFF (started by 18-year-old Greta Thunberg, a Swedish climate activist, in 2018) in Mumbai, Manan Desai, says, “The ‘hateful Khalistani’ narrative against Disha is nothing but false propaganda. She is not part of the Sikh community and the toolkit has nothing to do with the Khalistan movement, but just guidelines to support the farmer’s protests online and offline. Political parties and corporates, too, use toolkits for spreading their agenda and issues.”

FFF — a Thunberg-led movement that saw young activists sit in front of the Swedish parliament every Friday for three weeks to protest against the lack of action on the climate crisis — was also active in protesting against Minister Prakash Javadekar and the Environment Impact Assessment draft. “The government and the IT cell tried to malign us back then, painting us as a terrorist group. They are following the same pattern with ours and Disha’s support for the farmer’s protest,” he says.

Another Disha’s friend from FFF, who also requests not to be named, says, “Her arrest is a shock for all of us. All she did was share the toolkit as part of the campaign. She is keen on spreading awareness on the environment, alternative and sustainable products and planting trees. All she wants is to bring a positive change in the world.”

Now we are on Telegram too. Follow us for updates
TAGS
Disha Ravi Toolkit toolkit row farmer protests climate activist