The first election held after the formation of the constituency in 1962 saw R Achuthan of Congress winning the LS seat.

MAVELIKKARA: Mavelikkara Lok Sabha constituency, which spreads over three districts in Central Travancore, carries the legacy of princely state and the culture derived on the banks of river Achankovil. After the formation of the constituency in 1960, the UDF represented the segment 10 times. The victory of C S Sujatha of the CPM in 2004 after overpowering Ramesh Chennithala, the young face of Congress, with a margin of 7,414 votes, was the only relief to the LDF.

When the constituency was formed in 1960, it comprised seven Assembly constituencies spread across Alappuzha and Kollam districts viz., Kayamkulam, Mavelikkara, Tiruvalla, Kallooppara, Aranmula, Pandalam and Chengannur. In 2008, the delimitation committee reconstituted the constituency with Kuttanad, Mavelikkara, Chengannur, Changanassery, Kunnathur, Kottarakkara and Pathanapuram. Following that Mavelikkara and Kunnathur were reserved for Scheduled Caste community, and it led to the reservation of the LS segment for the SC community in the 2009 election. 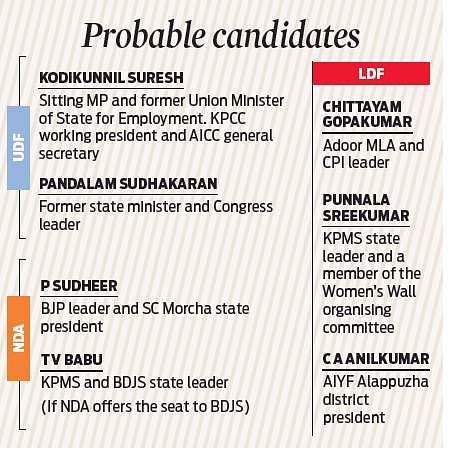 Kurian’s  winning streak
P J Kurian won from the constituency in five elections, though he covered a period of 14 years in these elections. Byelections were necessitated in 1991, 1998 and 1999.

LDF upperhand in Assembly segments
In the 2016 Assembly election, the LDF became victorious in five Assembly segments except Changanassery and Pathanapuram constituencies. After Kerala Congress(B) joined the LDF, Pathanapuram segment turned to the LDF. If one goes by the previous Assembly polls, the segment shows a slight tilt towards the Left though in the LS polls the inclination is towards the UDF.

Now we are on Telegram too. Follow us for updates
TAGS
Mavelikkara Lok Sabha constituency