Going by the average sale for the last six months, the total sale till now comes to around Rs 45,000 crore.

THIRUVANANTHAPURAM: Kerala has gulped down liquor worth around Rs 45,000 crore in the last three-and-a years after the LDF government assumed office. A week after the Cabinet granted its nod to produce fruit-based wine and liquor with low alcohol content, data shows liquor worth Rs 35,587.98 crore was sold by the State Beverages Corporation during the April 2016-March 2018 period.

Going by the average sale for the last six months, the total sale till now comes to around Rs 45,000 crore.

Last Onam, the state had registered an all-time high sale of liquor--Rs 487 crore while it was Rs 457 crore during the year-ago period. With Kerala having the highest per capita alcohol consumption, the state exchequer accrues its biggest revenue contribution from the sale of liquor. 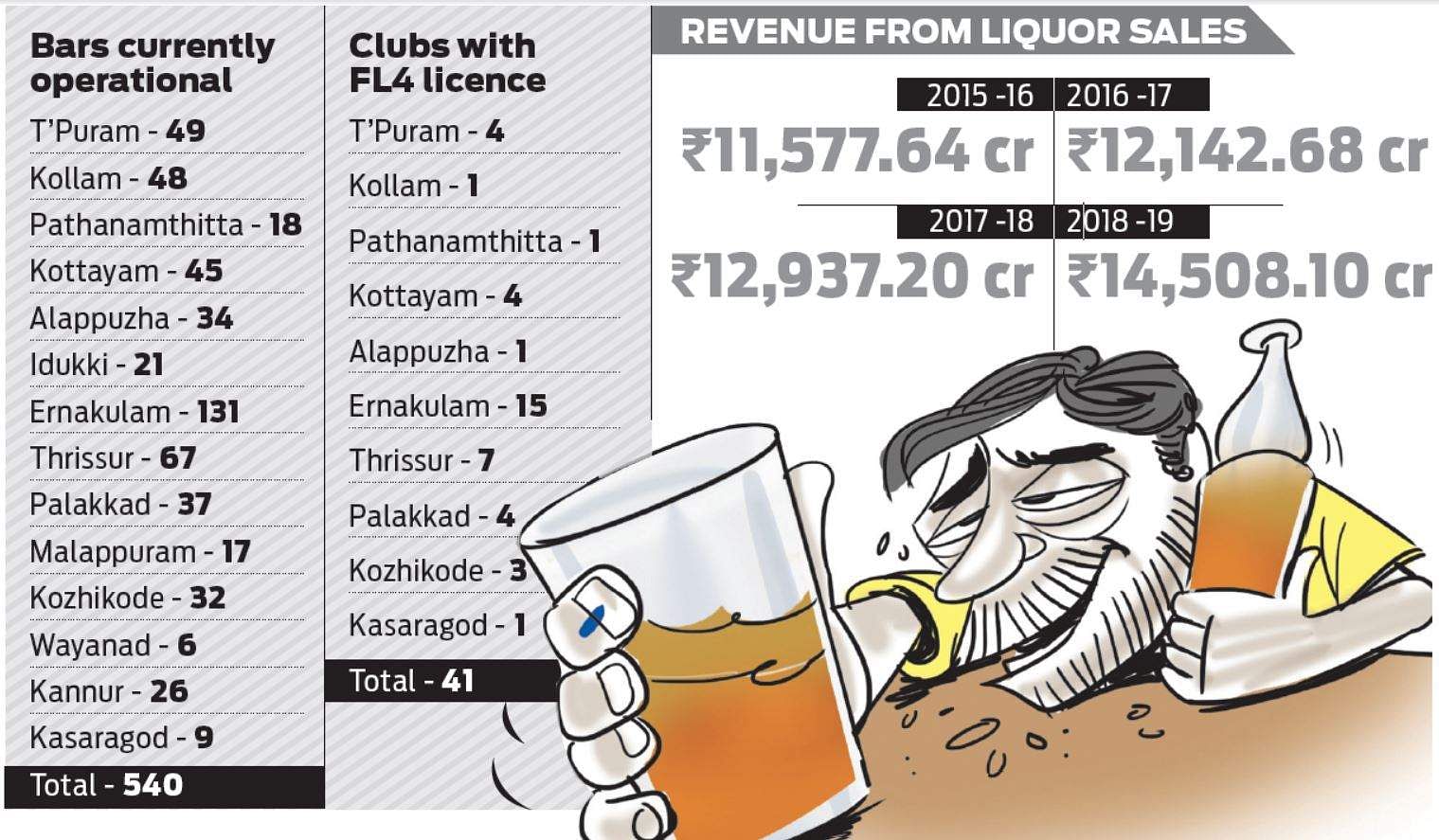 Information obtained by NGO ‘The Proper Channel’ under RTI, shows there is a manifold increase in the number of bars operating in the state. Going by the info, the state had just 29 bars when the Oommen Chandy government left office.

Now, three years on, the number of bars has gone up by at least 20 times to 540 bar hotels. In addition, currently three applications for bar licence are pending before the government.

The LDF government came to power vowing steps for ensuring liquor abstinence. But three years down the line, not only have the sales zoomed, there is a 20-times increase in the number of bar hotels,” said M K Haridas, 'The Proper Channel' president .

The liquor sale shows an increase of around 10 per cent every year. There also seems to be a substantial increase after June 2017 when the LDF Government decided to reopen the bar hotels, as part of its revised liquor policy. Around 14.5 per cent increase in sales was recorded during 2018-19.

A major development is the increase in the number of clubs licensed to sell alcohol, he pointed out. As many as 41 clubs registered under the Charitable Society Act have liquor licence while their number was a mere 19 in 2009.

Curiously, the FL3 licence fee is Rs 28 lakh while the FL4A for clubs is available at Rs 15 lakh. It’s strange that clubs registered under Charity Act sell liquor, he added.

Most of the bar hotels in the state are in Ernakulam district - 131. Wayanad has the least number - six. Similarly, while Ernakulam has 15 clubs with FL4A licence, four districts --Idukki, Malappuram, Wayanad and Kannur -- have no clubs with a liquor licence.

Now we are on Telegram too. Follow us for updates
TAGS
Kerala liquor Kerala alcohol habits