Monsoon predictions keep Kerala on toes, but KSEB not wary

With the Southwest Monsoon at the doorstep, concerns raised by a section of meteorologists about a possible extreme weather event have been keeping Kerala on its toes.

KOCHI: With the Southwest Monsoon at the doorstep, concerns raised by a section of meteorologists about a possible extreme weather event have been keeping Kerala on its toes. There has been a growing demand to bring a flood protocol to maintain the water level in dams to avoid a 2018-like situation. However, Kerala State Electricity Board (KSEB) which manages 57 dams is not panicky. 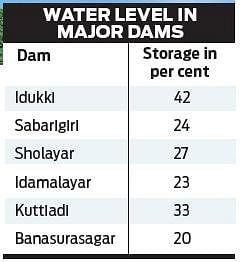 An orange alert and red alert will be issued subsequently. Controlled release of water will be started only after obtaining permission from the authorities,” KSEB chairman N S Pillai told TNIE. However, the water level in Idukki dam, the biggest reservoir in Kerala, is a cause for concern. The water in the dam stood at 2,345ft on Wednesday — 42 per cent of the total storage capacity. The storage in the dam usually dips to 20 per cent by May as the board increases hydel power generation to meet summer demand. This time, the lockdown and the shutting down of three generators have forced the board to reduce generation.

Idukki power station has six generators with a capacity of 130MW. However, the power output from Idukki stood at 9MW on Wednesday. “Two generators were shut down for maintenance in March. We could not complete the work as technicians could not arrive due to the travel restrictions. Another generator was shut down after a blast in February. Only three generators are functioning now,” said an official.

However, the board has not been able to increase generation due to the drop in power consumption. “Normally, the power consumption in Kerala peaks to 85 million units (MU) during summer. Now the average consumption ranges between 65 to 72 MU per day. This has forced the board to surrender power purchased from the national grid,” said Pillai.

Now we are on Telegram too. Follow us for updates
TAGS
Monsoon Kerala KSEB