Veteran theatre artiste and director Asim Basu passed away due to prolonged illness at Capital Hospital here on Wednesday.

BHUBANESWAR: Veteran theatre artiste and director Asim Basu passed away due to prolonged illness at Capital Hospital here on Wednesday. He was 83 and is survived by two daughters and a son. Also famous for stagecraft and set designing, Basu was suffering from acute lung infection and was undergoing treatment in the ICU of Capital hospital for the last several days. Though the Culture Department had sanctioned monetary aid of `one lakh for Basu's medical treatment on January 25, the help came too late. 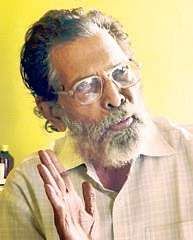 A recipient of the State Sangeet Natak Akademi Award in 1998, Basu was born in a small village in North Balasore and had left home to learn painting in Kolkata. He completed a course in painting from Government College of Art and Craft, Kolkata and returned to Odisha to start a career in book cover and stage designing in 1963. During his college days in Kolkata, Basu was associated with actor Utpal Dutt's Minerva Theatre where he honed his skills in dialogue recitation.

Basu worked in the Agriculture Department for a brief period before entering theatre. In 1967, he started a theatre group 'Rupakar' and staged Bijay Mishra's 'Duiti Surya Dagdha Phula Ku Nei'. A few years later, a group of theatre enthusiasts along with Basu branched out of 'Rupakar' and formed 'Uttar Purush' theatre group. An artiste par excellence who dominated both the stage and visual art scene for several years, he did stage designing for over 500 plays and was the art director for several Odia films. Basu also directed around 200 plays.

Though the State Government had chosen him for Dharmapada Award for the year 2010, Basu never got the award. Condoling his death, Chief Minister Naveen Patnaik said Basu was a versatile genius who dedicated his entire life for art and culture of Odisha. "His death has created a void in the arena of culture. My heartfelt condolences to his family," he said.