Most of the 350 non-governmental organisations or associations  said the list was faulty.

CHENNAI: Nearly 350 non-governmental organisations or associations from Tamil Nadu including Madras Christian College, Tambaram, Young Men’s Christian Association, Kanniyakumari and IIT Madras are under the scanner of the Ministry of Home Affairs for non-submission of annual returns under Foreign Contribution (Regulation) Act, 2010, for the last six years. 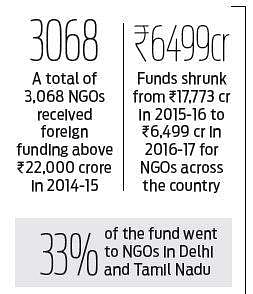 However, most of the organisations, when contacted by Express, have stated that the list is faulty as some of the organisations are exempt from filing it while some have been filing returns regularly.
When Express contacted IIT-Madras director Bhaskar Ramamurthi, he said that IIT-Madras is exempted under the FCRA Act but the MHA has been continuously sending the notices. “We are fully compliant,” he said.

Similarly, Pasumai Thayagam founded by PMK founder Anbumani Ramdoss has filed the returns even though the organisation has nil foreign funding.The MCC officials could not be contacted for their reaction. Others in the list include St George Anglo Indian Higher Secondary School, Arcot Lutheran Church Schools project in Villupuram and Christian Mission Hospital.

As per Section 18 (1) of the Foreign Contribution (Regulation) Act, 2010, non-governmental organisations and associations registered under the FCRA are required to submit electronically online report for every financial year within nine months of the closure of financial year.

The Ministry of Home Affairs has stated that associations which do not receive foreign contribution during a particular year are also required to furnish a nil return for that financial period.Interestingly, Tamil Nadu has nearly 4,000 associations and organisations registered under the FCRA. It is learnt that the state NGOs are one of the largest beneficiaries of funding from foreign agencies.

Now we are on Telegram too. Follow us for updates
TAGS
non-governmental organisations ngo Tamil Nadu