The samples tested in the State so far is 1,01,874, with an average of 7,000 samples being tested per day across 41 labs. Health Minister C Vijayabhaskar has said the State aims to raise the daily tests to 10,000 soon. Chennai alone has tested five times more than rest of the State at an average of 3,096 people per million population.

Health Department officials say the high average could be due to categorically testing all types of patients who come to hospitals. “We have been testing people with influenza-like illnesses, Severe Acute Respiratory Illness (SARI) cases, and lately, antenatal mothers too,’’ Director of Public Health Dr K Kolandasamy told Express.

Dr Kolandasamy says tests have been done in an objective criteria across districts wherever they are needed. “We have also been monitoring high-risk people and healthcare workers. The strategy is to test, identify, encircle and contain,’’ he adds.

Interestingly, the testing average of most districts in the State has been higher than the national average, with Namakkal, Perambalur, Thirupattur, and Theni districts testing more than 1,000 per million population.

“We now have the daily data of every street of every ward of every zone. Apart from this, for every positive case identified, our team traces up to 30-35 contacts,’’ says Prakash.

He further says all the cases of influenza-like Illnesses (ILI) arriving at Corporation and private hospitals are being tested. People were excellent in their cooperation, except in a few cases.

Moreover, in some cases, certain people were hiding the information, but later came forward for testing, he adds.

Meanwhile, virology experts note that testing needs to be ramped up wherever there is a high risk of infection.

“Two months ago, the State was not prepared, but now TN has fared better than many other States,’’ says Jacob John, an expert in the field. He, however, adds a note of caution that the numbers are not adequate but are need-based. “If we keep testing more in hotspots, we may find more cases.”

A SNIPPET OF AFFAIRS 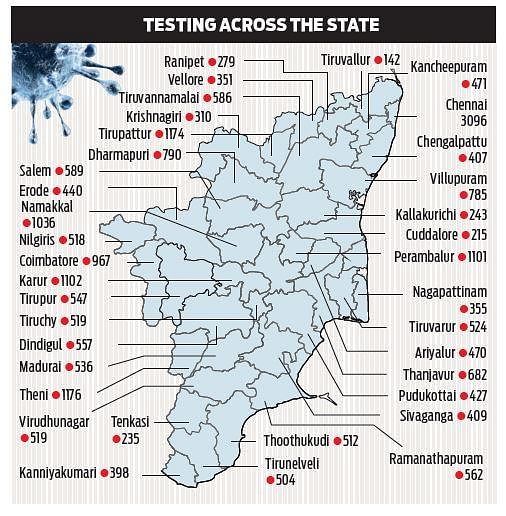