CHENNAI: At 48,000, Tamil Nadu is performing the highest number of tests per day, Chief Minister Edappadi K Palaniswami informed Prime Minister Narendra Modi on Sunday morning. Modi telephoned Palaniswami to enquire about the containment measures being undertaken in the State. Intensive steps are being taken to prevent the spread of disease, the CM informed the PM.

The measures seem to be yielding results in Chennai, where the positivity rate has plunged substantially from 31.67 per cent to 9.52 per cent. The rate has reached the single-digit mark after a gap of over two months. However, the State on Sunday recorded the highest single-day figure of 4,979 cases. As many as 78 deaths were reported.

Districts in the northern and southern tip continue to witness spurt in cases, while central regions are seeing new clusters being formed. With 405 new cases, Tiruvannamalai came second with respect to caseload in the State, followed by Chengalpattu (304), and Virudhunagar (265).  A new cluster has sparked concerns in Kumbakonam, where 20 streets been classified as containment zones. Most of the cases here are linked to the Darasuram market. Now, traders in the town have volunteered to keep shops open only from 6 am to 4 pm. 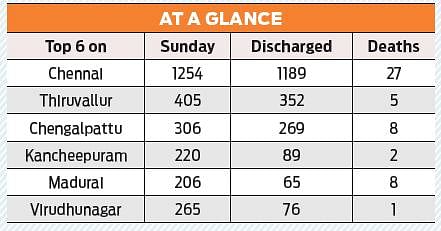 Now we are on Telegram too. Follow us for updates
TAGS
EPS Tamil Nadu covid 19 COVID 19 Coronavirus