In Chennai, for instance, of the over 85,000 recovered patients, only a mere 15 have come forward as donors.

CHENNAI: Plasma therapy is the new buzzword in COVID care. The State government is promoting it aggressively across districts. But, its initiative does not seem to be getting the required support from recovered patients, who are potential donors. Volunteers say very few recovered patients are coming forward to donate plasma.

In Chennai, for instance, of the over 85,000 recovered patients, only a mere 15 have come forward as donors.

“One can donate plasma 28 days after testing negative. Several private and government hospitals in Chennai and other parts of the State have been trying plasma therapy to increase the recovery rate. However, only a few people are coming forward to donate the plasma,” says S Mohan, a volunteer.

A senior official at the Rajiv Gandhi Government General Hospital said they had administered plasma treatment to 24 people, of which 22 recovered and two died.

“We are using this treatment on patients with mild symptoms as mentioned in the ICMR guidelines. Government hospitals are just starting to use plasma treatment and there is definitely a shortage mainly because of social stigma. Awareness is the only way out,” he said.

Thirty-year-old Hameedudeen, a faculty at the New College and a volunteer organising plasma donation in Tamil Nadu, said the insistence on conducting RT-PCR test on the donor could be the main reason keeping people away.

“Private hospitals are asking the donors to take RT-PCR test. For blood plasma donation, only the presence of Immunoglobulin-G levels has to be checked. For someone who has recovered recently and faced all the stigma around the disease, taking a test again could be undesirable. If they waive this off, more people will come forward,” said Hameedudeen.

Hameed further said plasma of O positive and AB positive blood groups are in most demand.

“Recently, we had to search for an O positive donor for two days to help a patient suffering from lung infection in Chennai. By the time we found a donor, the patient had passed away. Given the number of discharged patients, finding a donor should have taken only a few hours,” he said. Plasma donation is as safe as blood donation and the awareness on it must be spread, said experts. To donate plasma, people can contact the government blood bank or volunteers.

As some COVID deaths were being missed out from the official data, a nine-member panel was formed by the health department to review them

The panel recently found to be related to the virus, but not included in the official data. They were added at a later stage

Koyambedu: where it all worsened

The State’s largest cluster was reported from the city’s main market area – Koyambedu. Subsequently, the vegetable market was shifted to Thirumazhisai on the city outskirts and the fruit and flower markets were moved to Madhavaram

A bank multiplying cases in Tiruchy?

Two commercial establishments on NSB Road have accounted for more than 140 cases in Tiruchy district. A new hotspot also seems to be emerging at a nationalised bank here, where more than 20 employees have tested positive for the infection

All that glitters is not gold 250+

people who have tested positive in Coimbatore have links with a common source — gold-making units in Selvapuram & Rakkipalayam. A door-to-door survey has been launched as almost all samples from here are +ve.

Madurai markets as bad as Koyambedu?

300 odd people at Paravai and Mattuthavani markets in Madurai tested positive on a daily basis since June 15. Traders complain that there was no monitoring mechanism to control the crowd in these markets.

The number of active cases in the State is much less compared to the overall figure. This was brought under control by primarily focussing on containment efforts in Chennai.

At least five police stations across TN have shut down this month after cops there tested positive. As of July 6, over 3,000 personnel had tested positive. Till June 20, only 1,500 of them were +ve.

1. The government last week approved pool testing for COVID-19 diagnosis in areas with 2-5 per cent positivity rate across the State. Pool testing is a method of testing samples of up to five individuals as one. If the pool tests negative, all the samples in the pool are considered negative. If it is positive, every sample in the pool is tested again

2. The State, after much deliberations, decided not to use the rapid-antigen testing kits as suggested by the ICMR. Despite that, it has drastically increased testing from 12 lakh on July 1, to 22.8 lakh on July 25

3. Tamil Nadu’s tests per million is 24,262, which is more than twice the national average of 10,421. According to data, the incidence of the disease per million population in Chennai and five other districts was higher than the Tamil Nadu figure of 2,200 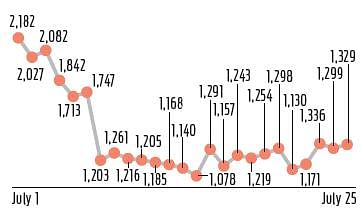 Though the State is still not out of the woods, it has scripted a success story of sorts in Chennai, where the numbers have largely been brought under control, thanks to the round-2 of intensified lockdown and fever camps of the Corporation 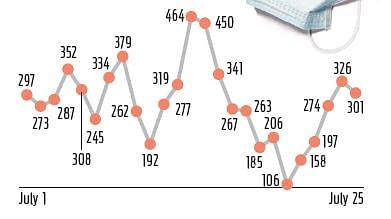 The surge in Madurai happened much later, especially after the Koyambedu cluster spread its tentacles across the State. The intensified lockdown in Chennai hurt Madurai. But, over the last few days, the numbers seem to be coming under control, thanks to the containment efforts and fever camps 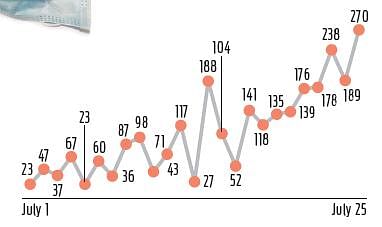 The district has seen a shift from being a COVID-free zone with zero active cases on May 13, to a sudden spike in fresh cases, of late. Health officials say the spike can be attributed to clusters and travellers. With a 3.3 per cent positivity rate, the department has been testing 3,500 to 4,500 samples daily. 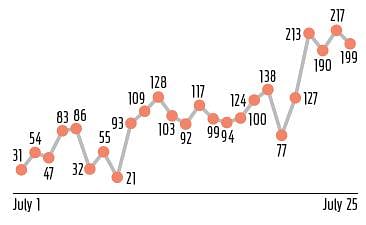 The district had been averaging about 100 cases since July 4. However, in the past few days, the numbers hovered around the 200-mark. The intense lockdown from July 10 to 24 in three wards of Srirangam zone has helped reduce the cases, said Corporation Commissioner S Sivasubramanian. 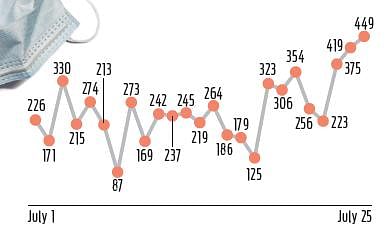 The proximity to Chennai did not help. Neither did the lack of medical infrastructure as good as in Chennai. The administration has been doing rigid contact tracing since May. Areas like Pallavaram, Chrompet are monitored because even when roads were closed, people could use interior streets. 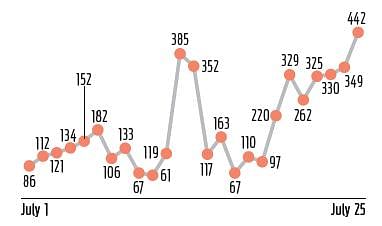 The focus is now on Kancheepuram, where the spike has been alarming. Volunteers will do door-to-door surveillance and pick up symptomatic patients at the earliest, claim officials. Hundreds of volunteers are there to survey and take patients to care centres. 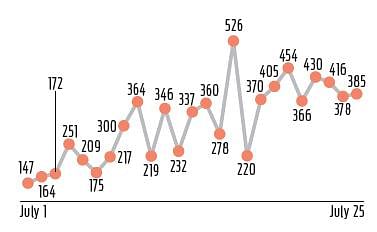 Here again, the proximity to Chennai hit the district hard. However, the numbers, after hitting an all-time high of 526 earlier this month, has been brought under control. While officials attribute it to increased testing, concern is rampant among residents about rate of infection. 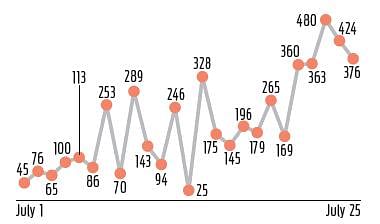 The district has been witnessing continuous spike in the number of COVID cases in the past week, reporting an average of 400 cases for the past five days. “Though testing is ramped up to 2,500 per day, results arrive within 4-7 days, which makes further tracing complicated,” say health officials.