Along the roadside, in Athiyuthu on Wednesday, cows and calves were seen feeding on freshly plucked flowers, discarded by the floriculturists of the village.

TENKASI: Along the roadside, in Athiyuthu on Wednesday, cows and calves were seen feeding on freshly plucked flowers, discarded by the floriculturists of the village. One Chelladurai, a Kuthapanchan floriculturist, told TNIE that he had fed his cow the marigold flowers he had cultivated, as the flower markets were shut, following the 21-day nation-wide lockdown that came to into effect beginning Tuesday midnight.

So was the state of several floriculturists in places like Athiyuthu, Melapavur and Surandai. As the markets were shut and flower export to Kerala prohibited, the farmers threw the flowers away on the roadsides or fed cattle the yield of their months of toil. Chelladurai said that a week ago he was able to sell one kilogram marigold, which plant takes an average of 40-50 days to flower, for Rs 20. “I could earn at least Rs 4,500 a week, till Friday last. 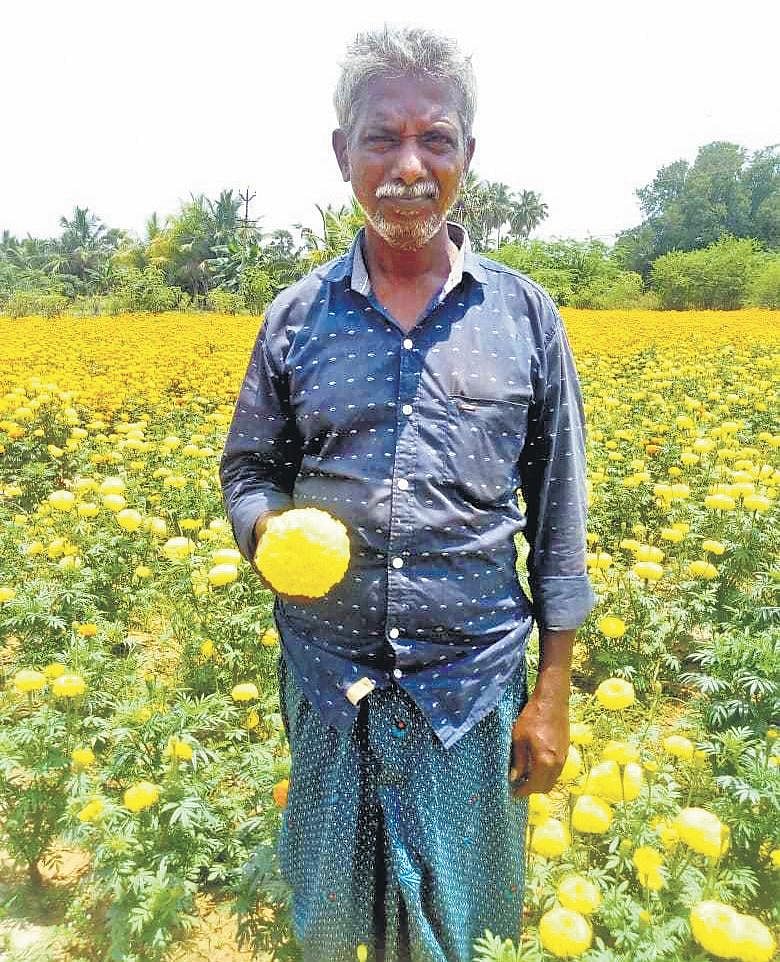 With the markets shut, I am incurring a huge loss and the revenue has not yet met the cost of cultivation,” he said. Murugan, a marigold farmer in Muthumalaipuram, said that he had left the flowers in over 5,000 plants unplucked, as the traders shut their shops. Thousands of farmers from across the district are cultivating marigold, jasmine, tuberose, rose and marikozhunthu. They sell their yield at the flower markets in several towns in the district, including Sankarankovil, Tenkasi, Surandai and Sivakamiyapuram. The yields, mainly, are exported to Kerala and sold at flower shops in Tenkasi and the neighbouring districts.

For the last two months, the traders said, the production of jasmine and marigold was higher than that of the other flowers. However, the farmers faced a huge loss, following the sealing of Kerala border, lockdown, and the pandemic scare. Thiruppathi, a trader of Sivakamiyapuram flower market, said that the coronavirus outbreak has heavily affected their livelihood. “A week ago, we purchased one kg of jasmine between Rs300 and Rs 400 from the farmers, and we were able to get a sizeable profit by selling it to the traders in Kerala. Also, we were purchasing tuberose, rose and marikozhunthu for Rs 60, Rs 70 and Rs 80 respectively. However, since the morning, we are sending back the farmers home, as we had to shut the shops. We sold only a few garlands for the marriage ceremony planned for Thursday evening,” he added.