Brace for another depression ahead, from the Bay of Bengal

CHENNAI: Barely two days after the very severe cyclonic storm Nivar made a landfall over the coast of Tamil Nadu and Puducherry, a new low pressure area has formed in southeast Bay of Bengal, and would intensify into a depression in the next 48 hours, said the Indian Meteorological Department (IMD) on Saturday.

The weather system has formed over south Andaman sea and its neighbourhood, said N Puviarasan, director of Area Cyclone Warning Centre at Regional Meteorological Centre. He added, “It is likely to move towards south Tamil Nadu, where heavy to very heavy rainfall is likely to occur at isolated places from December 1.” Meanwhile, overcast conditions would continue in Chennai with the maximum and minimum temperatures hovering around 30 and 22 degree Celsius, respectively.

Experts opined that a growing proportion of tropical cyclones are developing quickly, known as rapid intensification. According to multiple studies, these changes are linked with climate change. Warm ocean waters are one factor that drive rapid intensification, which is a threat because it makes it harder to forecast how a storm will behave and so to prepare before its landfall.

A recent study said “ocean surface and subsurface conditions played a vital role in the genesis and intensification of cyclone Ockhi,” that hit Tamil Nadu, Kerala, and Sri Lanka three years ago, resulting in over 800 casualties. Unusually warm ocean temperatures had favoured its evolution into a cyclone in just 9 hours.

IN similarity with the rest of  the world, sea surface temperatures in the Bay of Bengal have been steadily increasing over the past few decades, the study said. 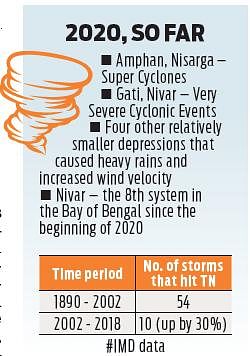 The La Nina-cyclone relationship
Additionally, tropical cyclones in the Bay of Bengal are affected by an El Nino-Southern Oscillation (ENSO), a meteorological phenomenon that affects wind patterns and sea surface temperatures in some regions of the Pacific Ocean, with consequences in different parts of the world.

Scientists have found a correlation between the cooler phase of ENSO, known as La Nina, and an increased tropical cyclone activity in the Bay of Bengal. Roxy Mathew Koll, a scientist at the Indian Institute of Tropical Meteorology, and the lead author on a report on Oceans and Cryosphere by the Intergovernmental Panel on Climate Change (IPCC), told Express:

“Now, we have a La Nina in the Pacific that makes the local environmental conditions favourable for cyclogenesis (the strengthening of an area of low pressure, resulting in the formation of a cyclone) in the Bay of Bengal.” “During the last 40 years, six cyclones, of the severe cyclone category, had hit the TN coast in November. Five of these coincided with La Ninalike conditions in the Pacific. So that means, to some extent we were expecting a cyclone season in the Bay of Bengal, during this time, and it is not a surprise,” Koll added.

Hotter the climate...
The Bay of Bengal is a part of the warm pool region, where temperature is generally around 28-29 degree Celsius in November, occasionally exceeding 30 degrees. These high temperatures are generally conducive for cyclogenesis. “On top of that, there is an element of global warming. This time, the temperature anomalies are about 0.5-1 degree, and in some regions 1.2 degrees, based on buoy and satellite estimates.

Every 0.1 degree means additional energy for the cyclone to maintain and develop,” said Koll. He added that the winds too favour a cyclone formation. The Madden Julian Oscillation (MJO), which is a band of eastward moving cloud bands, is currently active in the south of Bay of Bengal.

“So, with favourable ocean-atmospheric conditions leading to cyclogenesis, and an element of climate change, more tropical cyclone develop quickly,” he said. The report also warned that if global warming was not stopped, there would be a rise in such events, both in number and in severity.

Now we are on Telegram too. Follow us for updates
TAGS
cyclonic storm Nivar low pressure area Bay of Bengal