Telangana is now the largest producer of solar energy in the country, after toppling its role model Gujarat.

HYDERABAD: Telangana is now the largest producer of solar energy in the country, after toppling its role model Gujarat. Gujarat was number one in the country in generating this form of renewable energy, but now has been relegated to the sixth spot. Statistics available in September show that Telangana, generating 2,792 MW of solar power, tops the list, followed by Rajasthan (2,219 MW). Gujarat is producing 1,384 MW of solar power.“We beat Gujarat and occupied the first place. In the next five to six months, another 500 MW of solar power generation will commence. 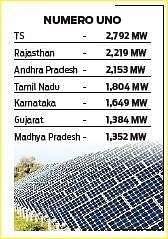 The total solar generating capacity in the state will cross 3,000 MW mark in six months,” Special Chief Secretary (Energy) Ajay Misra told Express. The decentralised model of Telangana solar power policy seems to have yielded good results. Initially, TS planned to set up a solar park in Mahbubnagar district. Later, realising that concentrating all solar power units at one place would result in transmission losses, it spread the units across the state and the bidders too showed interest in the state’s policy.

“We invited bids in 2014 and 2015 for solar power generation. Our planning is now showing good results,” Misra said. TS Genco chairman and managing director D Prabhakar Rao said that they were planning to tap 4,500 MW wind power too. TS is planning to generate 5,000 MW solar power in next two to three years, while Gujarat (250 MW), Rajasthan (900 MW) and Tamil Nadu (33 MW) are adding much less. Telangana is going for solar power in a big way to run the various upcoming lift irrigation schemes and industries in the state.