A fearless crusader for social justice, Krishnan will be remembered as the champion of the downtrodden

HYDERABAD: Very few bureaucrats leave their imprint. PS Krishnan, who died at Delhi in the early hours of Sunday at the ripe age of 86, belongs to this genre. He was under treatment for age-related health complications at a private hospital in the nation’s capital.

A relentless and untiring crusader for social justice, he set an example for the new crop of civil servants.
The Director of Council for Social Development Kalpana Kannabiran who was associated with him as he burned himself out in the cause of helping the less privileged, recalls, while speaking to ENS: “He is the architect of the SC and ST Atrocities (Prevention) Act. He drafted the bill after holding hearings in different parts of the country.” 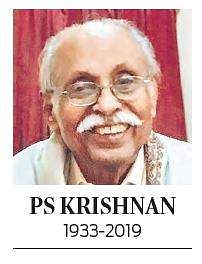 She also referred to the report that he had come up with during the late YS Rajasekhar Reddy’s regime in 2008-09 on inclusion of Muslims among the backward classes.“Even today the report is an authentic document on the socio-economic status of Muslims,” she says. Krishnan, was adviser to the State government then.

Despite his advancing age, he never hung up his shoes. “Recently, he wrote to the Prime Minister on budget cuts in special components for the weaker sections, says Kannabiran. “In his death, we lost a very precious voice. Even when his health did not cooperate, he never abdicated his responsibility in ensuring social justice to the needy. He belonged to a generation which was never deterred,” she said.
She further added, “He was known for his ethics and constitutional morality and always believed in using government for people. His service is unparalleled.”

In her post on Facebook, she said: “He is an inspiration to my generation and beyond. What a fearless fighter and anti caste-advocate. I am blessed to have been a close friend and mentee. My last long telephone chat with him was after the passing of M Yugandhar when he offered to intervene on my behalf with the government of Telangana to secure funding for CSD. I will miss him.”
Krishnan’s report on BC status for Muslims formed the basis for allowing the four per cent reservation to them in jobs and education in the State. Former minister Md Ali Shabbir said, “Till now, 25 lakh Muslim students have benefited by reservations which became possible because of his authentic report on the socio-economic status of the community.”

Krishnan was appointed as advisor to the YSR government after the High Court struck down the five per cent reservation for Muslims since, the court had said such a facility cannot be bestowed on the basis of religion.

“Krishnan studied the socio-economic and educational status of the Muslim community and came up with a comprehensive report, he said. Muslims will remember him forever for his service to them,” said Shabbir.

He conveyed his condolences to the bereaved members of his family. In another statement, Telangana IAS officers Association’s president BP Acharya, who is also Director General of MCR HRD Institute, said Krishnan, a 1956 batch officer was a doyen of social welfare policies in the State and was a champion of the downtrodden.He conveyed his deepest condolences to the bereaved family.

Now we are on Telegram too. Follow us for updates
TAGS
PS Krishnan

Why insult corona warriors: Rahul Gandhi on Modi government over 'no data' on medics who died