Biologists fear India may lose subterranean biodiversity in the absence of cave mapping and a conservation plan.

RAIPUR: The Left Wing Extremism-affected Bastar in south Chhattisgarh has a treasure trove of subterranean fauna inside Kotumsar cave waiting to be further explored and discovered. In fact, the discovery of Nemacheilus evezardi, a species of blind fish that live underground, had raised hope that efforts would be made to understand the vulnerability of subterranean fauna, its significance and, more importantly, the need of preparing a cave map of India.

But 61 years after Kotumsar cave was discovered in 1957, biologists rue, India knows very little about its biodiversity and evolution of organisms inhabiting the caves. Only eight species of subterranean fish have been discovered from Indian caves. In the absence of a cave map, biologists fear there is a danger of losing many species before other subterranean habitats are discovered.

“India has a long tradition of visits to caves because they have been considered house of Gods. But there is urgent need of a good mapping, with caves and biodiversity taken as the base for future conservation plan of such unknown, delicate and complex ecosystems,” Italian biospeleologist Giuseppe Messana says.

In the 23rd International Conference of Subterranean Biology in the US two years ago, biologists and speleologists (experts who study caves) called for identification of biodiversity hotspots of subterranean animals for understanding the evolutionary process of life on Earth.

Scientists and biologists regret the lack of “driving force and curiosity” to carry out exploration, study and research in India. “The subject is not listed in thrust areas of research of funding agencies in our country. We still don’t have a cave map for assisting scientists to explore and undertake research to know unfamiliar realm of enormous variety of life, existing as subterranean mega and micro fauna,” Prof. Atanu Kumar Pati, the ex-Asian member in executive council of ISSB, tells The Sunday Standard.

“One has to collate existing data on already known caves and add unknown caves to the list after they are discovered,” Pati says, adding that a cave map should be made at the national level. Incidentally, Meghalaya is home to the world’s longest sandstone cave, Krem Puri, which is more than 24,000 metre long. Officially, the Northeast state has 491km of surveyed caves. Chhattisgarh is said to have more than 100 caves.  “The number may run into thousands when we think of whole India,” says Prof Pati.

“Why neglect groundwater biology? There is not a single dedicated research centre in our country to address the study of cave species,” says Prof Y Ranga Reddy of Acharya Nagarjuna University, Andhra Pradesh. Prof G Marimuthu, Madurai Kamaraj University, Tamil Nadu, says India has some of the greatest subterranean biodiversity in the world. “Immense information remaining hidden inside the cave system should be explored but it needs backing.”

Several caves are feared endangered owing to unchecked activities of man — religious, tourism, agriculture, industry, mining, sewage pollution, and so on. “Any loss of cave biodiversity is akin to loss of spectacular fauna,” warns Prof Eleonora Trajano, a member of ISSB executive council. 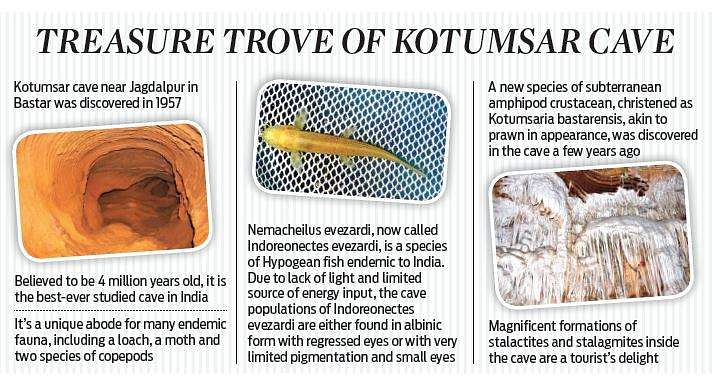 Now we are on Telegram too. Follow us for updates
TAGS
Chhattisgarh cave mapping