Given that India is among the top 25 most densely populated countries, social distancing is a headache for policymakers.

NEW DELHI: Social distancing is the best form of combating Covid-19 but enforcing it for a prolonged period poses a huge challenge in India, according to most experts.

“Social distancing is not a choice but a necessity and the most effective way to contain the spread of virus otherwise the results could be drastic,” said Dr Alexandar Kuruvilla, chief health strategy officer at digital healthcare platform Practo.

On the lines of the World Health Organisation guidelines, the government has suggested maintaining a distance of at least one meter between from those experiencing even mild symptoms of the virus like cold or cough.

But with a population of nearly 1.4 billion, India faces a completely different challenge. One of the main reasons for this is the high population density rate.

India is among the top 25 most densely populated countries. It is estimated that nearly 460 people live within every square km on average.

The country’s population is often compared with China’s but a point often missed is that the neighbouring country has a population density of less than 150 given its huge land size.

And that’s not all. The average population density statistics do not truly reveal the extent of the problem for India. 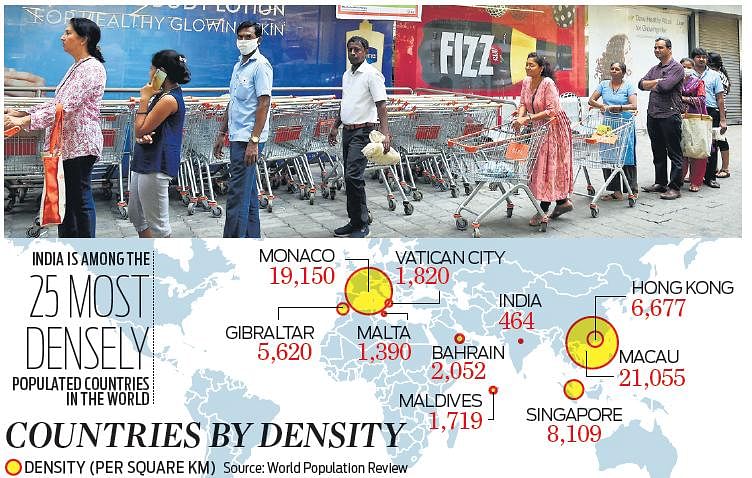 In states such as Delhi, Bihar, Uttar Pradesh, West Bengal and Kerala, the population density is double the national average.

Uttar Pradesh, Bihar and West Bengal are also among the most populated states in India, home to nearly 40 crore people.

These figures put into perspective the degree of proximity experienced in India, suggesting that social distancing measures that meet the WHO guidelines may be near impossible.

“There is also the question of transport to contend with. For the majority of Indians, second-class rail travel remains the only affordable means of transport. India’s trains are notorious for being overcrowded, a consequence of high demand and limited scheduled routes,” said Dr Priyanka Singh, a community health expert. “In cities, people often travel in overcrowded buses and local trains.” 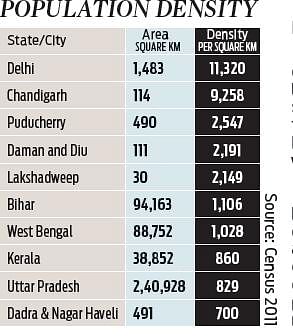 With no other viable alternative for transport, trains could effectively become giant incubators of the highly contagious infections such as Covid-19.

Mere social distancing might not be enough in the absence of a robust health surveillance system.

Colour codes on mobile phones in which green, yellow or red designated a person’s health status let guards at train stations and other checkpoints know who to let through.

“I read about a very interesting account of an Indian living in China who needed to travel from Beijing to Hubei, the worst-hit province, at the peak of the epidemic there,” said Oommen John, a senior health researcher with the George Institute of Public Health, New Delhi.

“That person was received by a government worker after arriving in Hubei and through an app he needed to feed his symptoms a few times a day. But the system did not solely rely on that too and workers were sent to his place a few times every day to check on him.”

John insisted that India too needed a more effective monitoring of those who are high at risk.

“So far, our approach has been dependent on verbal disclosure by the travelers and their thermal screenings but given long incubation of the disease that is not a foolproof method.”

John cited the example of Andhra Pradesh that has now prepared a data base of 1 million people of which 7,000 with a travel history or their close contacts have been identified as high risk.

“They are now being followed up very actively, that model may be worth emulating elsewhere too.”

Increased population densities and unhealthy living conditions in urban slums can ease the transmission of infections. Migration may also increase vulnerability to disease.

Infectious diseases such as HIV/AIDS among others have had a large impact on demographic trends, altering the age structures of heavily affected countries. Therefore, population density is a major factor.

Stay up to date on all the latest The Sunday Standard news with The New Indian Express App. Download now
TAGS
coronavirus outbreak coronavirus