India's annual consumer inflation rose to a seven-month high of 3.58 percent in October from a year ago, mainly driven by higher prices of food and fuel

NEW DELHI : Retail inflation continued its upward trajectory, albeit marginally, standing at 3.58 per cent during the month of October against 3.28 per cent in the previous month. The rise, supported primarily by increased vegetable and fuel rates, is likely to convince the Monetary Policy Committee (MPC) to maintain the status quo on repo rates at its next meeting on December 6. According to data from the Central Statistics Office, vegetable prices were the primary drivers of the Consumer Price Index (CPI), rising 7.5 per cent during the month. The surge has been exacerbated by the shortage in supplies of onions, with farmers avoiding onion sowing for the Kharif season because of unseasonably rains. 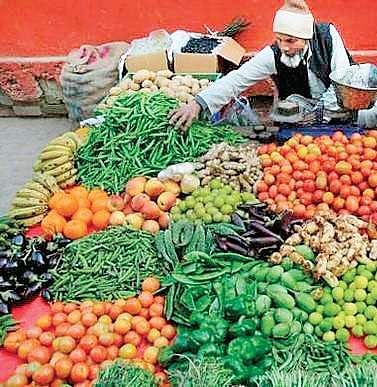 While the government has allowed state-owned agencies to import onions to boost domestic supply and check price rise, prices are expected to normalise over the next few months. Tomatoes, meanwhile, have also become costlier due to supply disruptions in Karnataka, a major producer. The current firming up of crude prices over the past few months has also weighed on CPI. Despite excise duty cuts, retail petrol prices have gone up by 7.6 per cent and diesel by 6.6 per cent in New Delhi over last year.

Forecasts on the trajectory that crude prices will take are not promising either. Fuel inflation in India is expected to increase 120 basis points (1.2 per cent) for the remainder of fiscal 2018 owing to higher crude prices, according to Soumya Kanti Ghosh, chief economic adviser, State Bank of India.

Going forward, the likely upward pressure on crude prices might hold the MPC from cutting repo rates in December. The weightage structure of the CPI results in a 25-basis points rise in retail inflation for every 10 per cent rise in crude prices if the government passes on the full hike, according to a UBS Global Research note.

Rising oil prices will also indirectly make production and transportation costs higher, exerting more pressure on retail prices. October also saw a 23.1 per cent decline in prices of pulses, 6.36 per cent rise in fuel and light prices, 6.7 per cent uptick in housing rates, and a 4.76 per cent spike in clothing and footwear prices.