Under the provisions of this section, income earned from interest on bank savings deposits, fixed/recurring deposit schemes and deposits in post office will be exempted from income tax up to Rs 50,000

CHENNAI: Finance Ministry’s slew of measures such as increased deductions for interest income, enhanced provision and higher limits for medical insurance premiums and treatments have made the lives of senior citizens financially less burdensome. Additionally, senior citizens have been given special bonanza by the introduction of a new section, i.e., 80TTB. Under the provisions of this section, income earned from interest on bank savings deposits, fixed/recurring deposit schemes and deposits in post office will be exempted from income tax up to Rs 50,000.

This is a significant increase in the limit, as the current exemption limit stands at Rs 10,000 under Section 80TTA. The enhanced deduction limit would be available under a new section, 80TTB and the senior citizens will no longer be governed under the provisions of section 80TTA. Additionally, the TDS threshold on deposits would be increased from Rs 10,000 to Rs 50,000. The only caveat is that the Rs 10,000 that was available for savings bank interest deduction would now not be allowed. Let us understand the impact of the Section 80 TTB through an example.

Besides, other privileges for senior citizens include a hike in deduction limit for health insurance premium and/ or medical expenditure from Rs 30,000 to Rs 50,000 under section 80D and for the treatment of certain specified illnesses, the deductions have been increased from Rs 60,000 to Rs 1 lakh under section 80DDB. In addition to their regular investment allowances and deductions, pensioners would be allowed to deduct Rs 40,000 from their taxable income.

Also, the Pradhan Mantri Vaya Vandana Yojana, a pension scheme for senior citizens, now has a higher investment limit of Rs 15 lakh from Rs 7.5 lakh earlier. Collectively, all these new deductions and allowances would result in an additional amount of around Rs 25,000 moving back into the pockets of senior citizens in the lower tax brackets. 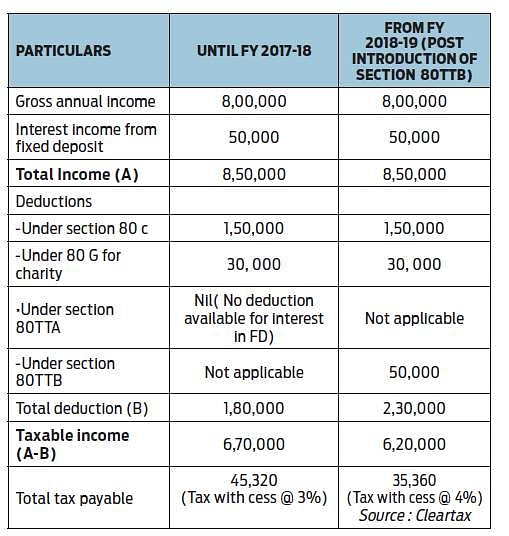