FMCG majors including Hindustan Unilever Ltd, Procter & Gamble India and Nestle were found to have profiteered from the lower tax regime.

The last three years have seen the government pass at least three major GST rate cuts with the most recent cut introduced in January this year, but fast moving consumer goods (FMCG) firms seem to be reluctant to pass on the benefits to end consumers.

Data released by the Ministry of Finance showed as many as 42 consumer complaints were registered against FMCG firms for overcharging customers since GST roll out in 2017. GST rates were cut across categories to reduce tax incidence on consumers and all companies were expected to pass on the benefit by lowering prices in proportion to the rate reduction. 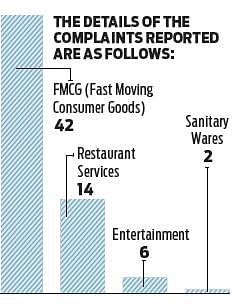 It was, however, found that many companies had not passed on the benefits of lower tax and indulged in profiteering. Complaints were later filed against them and the GST anti-profiteering watchdog National Anti-profiteering Authority (NAA) — which has been tasked to ensure traders don’t realise unfair gains by charging high prices from consumers in the name of GST — took up the cases.

“We also have complaints where companies have increased prices within one month of reducing it. While, some brands also tend to first increase the price ahead of a cut and later slashes it,” said a senior NAA official.

FMCG majors including Hindustan Unilever Ltd, Procter & Gamble India and Nestle were found to have profiteered from the lower tax regime. Just a few days ago, Nestle was pulled up by the NAA for not passing on GST rate cut.

In an order on its website, the authority said the consumer goods maker made undue profits to the tune of `89.73 crore on chocolate products, instant noodles and pasta, wafer chocolates, instant coffee products, curry paste, among others, that it makes under the brand names Nescafe, Maggi and Kitkat.

While the firm has already deposited Rs 16.58 crore in Consumer Welfare Fund under the Department of Consumer Affairs, it will now have to pay the remaining Rs 73.14 crore with interest. Experts say it is difficult for companies to assess the exact impact of lower tax given that they have multiple similar products in one category.

For instance, they sell products for as low as Rs 2 for a shampoo sachet and when the rate is lowered, they are not in the position to exactly assess the impact on price. Even if the assessment is done and it is found that the price should be lower by 30 paise, transaction becomes difficult as currency of that denomination is not available.

Now we are on Telegram too. Follow us for updates
TAGS
FMCG GST