India may have lost Rs 2.8 lakh crore due to economic slowdown

According to the Organisation for OECD, India’s potential gross domestic product is pegged at seven per cent, while other forecasts show growth barely humming at five per cent.

HYDERABAD:  What is India’s lost economic activity due to the ongoing slowdown? It is difficult to determine, but according to one estimate, it could be as much as Rs 2.8 lakh crore.

Often, economic growth or decline is measured in percentages, but if you take the absolute difference between actual gross domestic product (GDP) and potential GDP, it appears that we’ll likely add Rs 2.8 lakh crore less to the economy in FY20.

Potential GDP, a metric which economists widely use, measures how much larger an economy would be if all resources are put to use. In other words, that’s a scenario when employment remains high and equipment runs full-throttle.

According to the Organisation for Economic Co-operation and Development’s latest estimate, India’s potential GDP is pegged at seven per cent, while forecasts by several agencies show growth barely humming at five per cent.

It means, if the economy operates at full capacity or at seven per cent, FY20 GDP in absolute numbers should be about Rs 150.63 lakh crore. 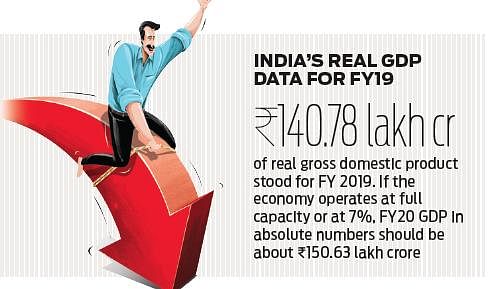 The good news though is that, even at 5 per cent growth, we’ll still continue to add a sizeable amount to real GDP.

For instance, in the past seven years, we’ve been adding roughly Rs 8 lakh crore to the GDP every year, but in FY20, the economy will expand by about Rs 7 lakh crore as against its potential of Rs 9.8 lakh crore, translating to a Rs 2.8 lakh crore lost economic activity, which isn’t as dire as it sounds.

The difference between GDP and potential GDP is also called as the output gap, which monetary policymakers use to determine whether the economy needs more or less monetary stimulus.

“My estimates for FY20 growth are around 5.2-5.4 per cent, therefore, the output gap is likely to be 1.8-2 per cent ... But as the positive implications of previous reforms like Insolvency and Bankruptcy Code and Goods and Services Tax kick in, we should expect the potential to be closer to 7.5 per cent and therefore, the output gap may widen in the near quarters despite some improvement in our growth rates,” Karan Bhasin, a Delhi-based policy researcher told this publication. He further said the output gap could close only towards Q3, FY21 as the potential growth increases due to past reforms starting FY21.

“We saw a combination of short-run measures and structural reforms like corporate tax reforms recently. Though many see the corporate tax cut to be more of a tax cut, it does have an element of reform as it gets rid of exemptions,” Bhasin further said.

He added that the J curve hypothesis, where an activity shows initial loss only to be followed by dramatic gains, suggests that over time the positive impact of these reforms should begin to show up.

Now we are on Telegram too. Follow us for updates
TAGS
GDP economic slowdown