NPAs and frauds on the rise in Mudra scheme

NEW DELHI: Instances of people turning defaulters in the government’s flagship Mudra scheme have refused to cease. Total Non-Performing Assets (NPAs) as a percentage of credit disbursed has shown an increase from 2.52% (FY 2017-18) to 2.68% (FY 2018-19). Moreover, instances of alleged frauds have also been reported from 2,313 Mudra loan accounts.

“PSBs periodically monitor NPAs for recovery of overdue amounts and follow recovery procedures as per policies approved by their Boards and in compliance of extant Reserve Bank of India,” it said.

Empowerment of women is also one of the main objectives of the scheme and the government has said that as on June 14, 2019, out of 18.91 crore loans over 13.18 crore loans, almost 70% , have been extended to women borrowers by Member Lending Institutions (MLIs) under Pradhan Mantri Mudra Yojana (PMMY) since inception of the scheme.

The government has taken steps towards effective implementation of PMMY scheme. These, inter alia, include simplification of application forms, facility for on-line application for Mudra loans, extension of Mudra to activities allied to agriculture, refinance from MUDRA Ltd, Credit Guarantee Scheme, nomination of Mudra Nodal Officer, weekly video conferences to monitor the progress. 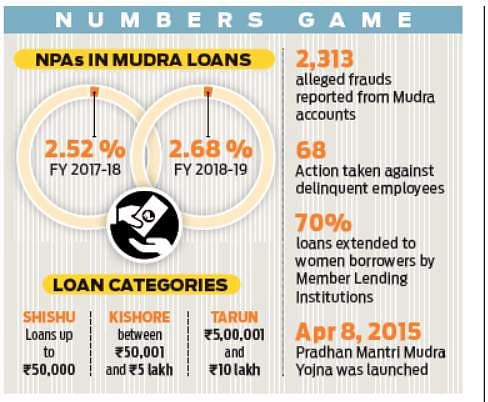