Defence personnel serving in the Indian Armed Forces have to be prepared to face risk on a daily basis, but there are few life insurance or retirement plans that cater to their specific needs.

NEW DELHI: Defence personnel serving in the Indian Armed Forces have to be prepared to face risk on a daily basis, but there are few life insurance or retirement plans that cater to their specific needs. Aviva Life Insurance this week joined a few others like HDFC Life and Max Life in launching a tailored plan for them.

Anjali Malhotra, chief officer (customer, marketing, digital & IT), Aviva Life, says their new plan, Aviva Income Suraksha, has been tailored to address this issue. “Defence personnel usually retire young;  between 38 and 42 years; and this lowers their primary income at an early point. So, we have designed this plan to be customisable to their needs. Since it is primarily focused towards serving jawans, premium payments can be made in monthly instalments, making them easy on the pocket,” she said.
The plan also offers customers a choice of deferring the start of monthly payments after maturity. “The deferment period is to provide flexibility to the customer to align the inflow of monthly guaranteed income to suit their life stage needs,” Malhotra said.

Under the plan, customers can opt for a premium paying period of 10 or 12 years and can choose between no deferment of payments or a deferment period of three or five years. The plan offers guaranteed monthly income for a period of 10 or 12 years, which will begin after maturity and the end of the chosen deferment period. It also offers an additional age-related one-time benefit paid along with the last monthly payout. The death benefit under the plan, which is triggered on the demise of the insured, offers similar structured payouts for 10 or 12 years as maturity benefit with higher quantum of monthly income to meet recurring expenses.

According to Malhotra, Aviva entered the defence channel last year and has seen substantial traction with presence in the North, East, Central and West Indian markets now. The addressable market for such plans is large, with just around three to four competitors in a region. “In addition to army, we also serve paramilitary forces. In India, defence personnel, according to 2010 data, account for a strength of 1.4 million active personnel and 2.1 million reserve personnel. Paramilitary forces will add another 1.3 million,” she said. 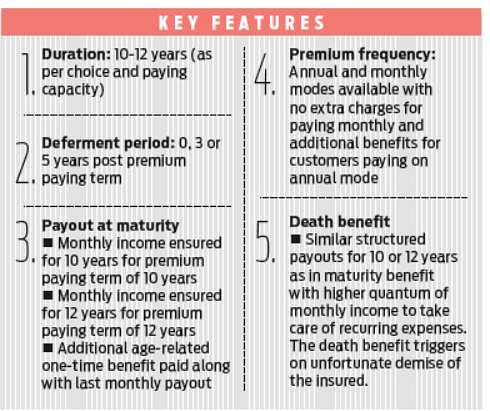