NEW DELHI:  The policy directive by the Narendra Modi government to focus on export-led growth to grow GDP to $5 trillion might turn out to be hard to achieve. Here’s why: India’s sales abroad are already showing signs of stress. And it is likely to get worse from here owing to a combination of factors — global slowdown, trade wars, and stiff competition from rivals such as China.

China, which is locked in a protracted trade war with the US, has started eating into India’s traditional export markets such as Africa and Latin America. “The competition will only intensify as China is trying to make up for its losses from the US,” says Prof Biswajit Dhar of the JNU. 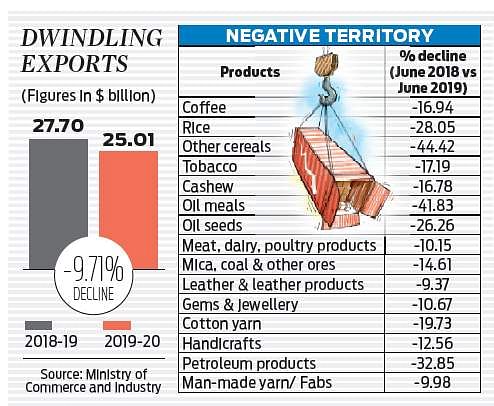 The China factor was hard to miss in India’s trade figures for June, when  exports shrank for the first time in nine months. “Global slowdown combined with protectionist measures in key markets and competition from China, which is looking to offset its losses from its trade war with the US, pulled us down,” says Prof N R Bhanumurthy, National Institute of Public Finance & Policy.

With both the commerce and finance ministries seeking to push exports, a drastic re-work of India’s trade strategy may be in the offing. Officials say duty walls being erected to protect domestic industry may have to be pulled down to gain market access abroad.

On a year-on-year basis, exports fell 9.71% last month to $25.01 billion, with key sectors like petroleum, gems & jewellery, rice, ready-made garments and engineering goods registering steep falls. The biggest drop was in petroleum products at 32.85% as the Jamnagar refinery was shut for a while. “Protectionist walls are being built by a number of countries besides the US,” said a commerce ministry official.

India, too, has been raising imports tariff to help domestic industry — something that will be hard to defend during trade negotiations. “These walls may have to be lowered as part of negotiations,” said the official cited above.